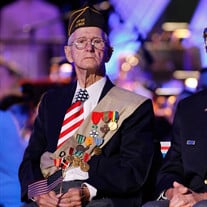 On Thursday, November 21, 2019, Jack Shields's desire to dance all over Heaven became reality. He knew that there would be no more tears, pain or sorrow there. His bride of almost 73 years, Marguerite Sizemore Shields, had only recently passed away in August. His survivors include his daughter Harriet, son in law, Tom, grandsons, Mike (Kristen), Andy (Melissa), Brad (Allison) and Matt (Abby). Jack has 3 great grand children Kaylee, Amari, and Brooks. A 2nd great grandson (Jackson) is expected early next year. Jack was one of 8 siblings who had all predeceased him: Howard, Paul, Wesley, Harold, Bernice, Estelle, and Calvin. A ninth child of Henry and Ruthie Shields had been stillborn. There are many nieces and nephews who have heard some tall tales, jokes and true stories over the years from Uncle Jack. Some of his nephews (Mike, Eddie, Stan and Don) have driven him on some adventures in recent years. Jack was a veteran of the U. S. Army. He had spent the first part of his service in Panama. There he contracted Malaria. Later he was transferred to a unit that would be sent to Europe where he continued his work in radar. He participated in 5 major battles including the D-Day invasion and the Battle of the Bulge. The liberation of Dachau was an experience that our service men, including Jack, would never forget. Some of his medals include the World War ll Victory Medal; The D-Day medal; Battle of the Bulge medal and the Croix De Guere from France. Several years ago Jack traveled to the French Embassy in DC where he was given the French Legion of Honor (Chevalier) (which is the highest order for military merit given by the French Government) for his participation in WWII and the liberation of France. The last part of his service in Europe was under General George Patton who Jack loved to talk about. Jack was definitely a "jack of all trades" as his family and some friends thought he could fix anything. His training at Electrical school in Chicago would serve him well and for a time he had a business in radio and TV repair. He would continue to do that for friends and family after changing careers. His love of all things CARS would last a life time. He would repair them, paint them, replace engines, and even cut the top off of one to make a hard top convertible. He loved Packards. He and Marguerite traveled to army reunions after his retirement from VEPCO as well as enjoying his grandsons. There were also several different car clubs that they belonged to. Jack loved serving his community. There were a number of projects that he participated in over the years. He also spoke about the service of our veterans when given the opportunity at memorial activities including those at the D-Day Memorial in Bedford. He would take other veterans to the VA in Roanoke for their medical care as well as to try to help them receive their service related benefits. Jack read the paper from cover to cover. He read everything he could about WWII. Many are familiar with his writings in the local papers. He did his research as well as depending on his actual experiences to write an article or speech. He was constantly typing something as well as writing poetry. In the last several years as Marguerite's health declined greatly Jack was her constant caregiver. He met her at a candy store and he said she had been giving him candy ever since then! He was a twenty year cancer survivor this year and his family is very grateful to have had him for so long. He was 96 years young. A funeral service will be conducted at 11:00 a.m., Monday, November 25, 2019 at Central Baptist Church, Altavista by the Rev. David Bayse. Interment will follow in Green Hill Cemetery with military honors by American Legion Altavista Memorial Post 36 and Gretna Post 232. The family will receive friends one hour prior to the service beginning at 10:00 a.m. at the church. Finch and Finch Funeral and Cremation Service, Altavista is in charge of arrangements. Please visit the online tribute at www.finchandfinchfuneralservice.com to share a memory or send a condolence to the family.

On Thursday, November 21, 2019, Jack Shields's desire to dance all over Heaven became reality. He knew that there would be no more tears, pain or sorrow there. His bride of almost 73 years, Marguerite Sizemore Shields, had only recently passed... View Obituary & Service Information

The family of Andrew Jackson Shields created this Life Tributes page to make it easy to share your memories.

Send flowers to the Shields family.