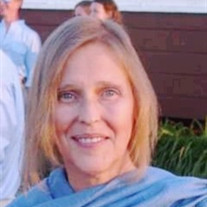 Ann Rountrey Ponzi, 63, of 1410 Hillcrest Street, Altavista died Friday, December 14, 2018 at her residence. She was the wife of Louis "Tony" Ponzi for 24 years. She was born September 16, 1955 in Altavista, a daughter of the late William Roundtrey and Alma Simmons Rountrey. She was a member of Altavista Presbyterian Church. She enjoyed being a nurse and retired her career as a Nurse Practitioner. She loved music, could play multiple instruments, most notably the piano, and spent many years sharing her talents in various rock and roll bands. She is survived by one son, Curtis Thornhill, of Louisville, KY; two daughters, Leeann Thornhill, and her husband, Charles Bleuel of Louisville, KY and Emily Byerley and her husband, Eric of Richmond, VA; one step-son, Louis Ponzi and his wife, Veronica of Colunbia, KY; one brother, William Rountrey and his wife, Cathy of Altavista; and grandsons, Teddy, Rhys, Oscar Bleuel , as well as Eric Byerley, Jr., expected in February; many dear cousins; and her beloved aunt "Bibi." She was preceded in death by her parents and her step-son, Michael Ponzi. A memorial service will be conducted at 11:30 AM Thursday, December 20, 2018 at Altavista Presbyterian Church. The Family will receive friends at the residence. The family suggests that those wishing to make memorials consider the American Cancer Society, 2050 Langhorne Rd., Ste. 201, Lynchburg, VA 24501 and the Michael Quinlan Brain Tumor Foundation, c/o BIAK, 7321 New Lagrange Road, Louisville, KY 40222. Finch and Finch Funeral and Cremation Service, Altavista is in charge of arrangements.

Ann Rountrey Ponzi, 63, of 1410 Hillcrest Street, Altavista died Friday, December 14, 2018 at her residence. She was the wife of Louis "Tony" Ponzi for 24 years. She was born September 16, 1955 in Altavista, a daughter of the late William... View Obituary & Service Information

The family of Ann Rountrey Ponzi created this Life Tributes page to make it easy to share your memories.

Send flowers to the Ponzi family.