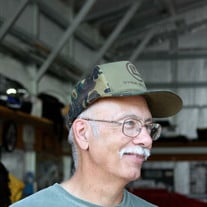 Barry Frank Isaacs, 71, of 1990 Pigeon Run Road, Gladys died Wednesday, February 9, 2022 at Centra Lynchburg General Hospital. He was the husband of Lelia "Leigh" Daye Isaacs for 41 years. He was born September 3, 1950 in Campbell County, a son of the late John Taylor Isaacs and Bernice Martin Isaacs. He was a member of New Chapel Baptist Church where he was a deacon, American Legion Post 16, a retired employee of the Department of Corrections and a National Guard veteran. Barry loved the outdoors, college football, basketball, NASCAR, and most of all his granddaughters. In addition to his wife, he is survived by three daughters, Julia Isaacs of Rustburg, Jessica Isaacs of Charlotte, NC and Jenna Isaacs of Gladys; three brothers, Robert T. Isaacs and his wife, Cindy of Gladys, Don R. Isaacs and his wife, Debbie of Rustburg and A. Dale Isaacs and his wife, Angela of Gladys; one sister, Barbara Isaacs Irby and her husband, Clarence of Lynchburg; two beloved granddaughters, MaKayla and Maddison Isaacs; surrogate daughter, Kelly Klein Allison (Chris); surrogate grandsons, Justin and Ryan Howes; and a host of nieces and nephews. A funeral service will be conducted at 2:00 p.m., Sunday, February 13, 2022 at New Chapel Baptist Church, Rustburg by the Rev. Tim Dooley and the Rev. Shelton Miles with interment to follow in the church cemetery with military honors. The family will receive friends following the service at the church and other times at the residence. The family suggests that those wishing to make memorials consider New Chapel Baptist Church, P.O. Box 515, Rustburg, VA 24588 or Patrick Henry Boys & Girls Plantation, 1621 Enterprise Dr., Lynchburg, VA 24502. Finch & Finch Funeral and Cremation Service, Gladys is in charge of arrangements.

The family of Barry Frank Isaacs created this Life Tributes page to make it easy to share your memories.

Send flowers to the Isaacs family.