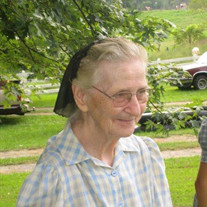 Betty Ruth Beachy, 89, of 1986 Covered Bridge Road, Gladys, VA died Saturday, January 5, 2019 at her home. She was the wife of Jesse Beachy for 64 years. She was born January 10, 1929 in Elkhart, IN, a daughter of the late Henry S. Miller and Sarah Hochstetler Miller. She attended Bethel Mennonite Church. Ruth was a very caring person who loved God, and shared that love with her family and anyone she met. She is survived by four sons, Nathan Beachy and his wife, Myra of White Pigeon, MI, Glen Beachy of Gladys, David Beachy of Coshocton, OH and Keith Beachy of Coshocton, OH; two daughters, Esther Bowman and her husband, Rich of Gladys and Mary June Hershberger and her husband, Quinn of Lynchburg; a brother, Thomas Miller and his wife, Naomi of Middlebury, IN; a sister, Fannie Ellen Yoder and her husband, Amzie of Albuquerque, NM; nine grandchildren; six great grandchildren and a number of nieces and nephews. She was preceded in death by one son, Stephen Beachy; three sisters, Mary Bontrager, Leona Bontrager and Martha Swartzentruber; and three brothers, Jesse, Alpha and Simon Miller. A funeral service will be conducted at 10:00 a.m., Friday, January 11, 2019 at Bethel Mennonite Church Fellowship Hall with interment to follow in the church cemetery. The family will receive friends from 6:00 until 8:00 p.m., Thursday at Bethel Mennonite Church Fellowship Hall. The family suggests that those wishing to make memorials consider the Christian Aid Ministries, P.O. Box 360, Berlin, OH 44610, ChristianAidMinistries.org. Finch and Finch Funeral and Cremation Service, Gladys is in charge of arrangements.

The family of Betty Ruth Beachy created this Life Tributes page to make it easy to share your memories.

Send flowers to the Beachy family.