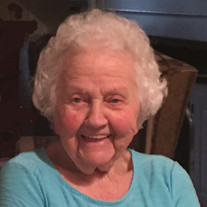 Beulah Dalton Hodnett, 99, of Rustburg died Wednesday, February 14, 2018 at Lynchburg General Hospital following a brief illness. She was twice married, first to the late Walter P. Hodnett and secondly to the late Bernard O. Hodnett. She was born July 16, 1918 in Pittsylvania County, a daughter of the late James Lewis Dalton and Mattie Switzerlet Dalton. She was a member of New Chapel Baptist Church and a retired employee of General Electric with twenty years of service. She is survived by one son, Morris Parker Hodnett and his wife, Mary Lou of Lynchburg; two daughters, Gloria Hodnett Joy of Rustburg and Carolyn Hodnett Hollie and her husband, Buddie of Lynchburg; three grandchildren, Michael Hodnett, Todd Hodnett (Amy) and John Hodnett (Sara); step grandson, Steven Crawford; seven great grandchildren and three step great grandchildren. She was preceded in death by a grandson, Keith Albert Hollie; five brothers, four sisters and a son-in-law, Rex Joy. A funeral service will be conducted at 3:00 p.m., Sunday, February 18, 2018 at New Chapel Baptist Church by the Rev. Tim Dooley with interment to follow in the church cemetery. The family will receive friends prior to the service from 2:00 until 2:45 p.m., at the church. The family suggests that those wishing to make memorials consider the New Chapel Baptist Church Cemetery Fund, PO Box 515, Rustburg, VA 24588 or a charity of your choice. Finch and Finch Funeral and Cremation Service, Gladys is in charge of arrangements. Please visit the online tribute at www.finchandfinchfuneralservice.com to share a memory or send a condolence to the family.

The family of Beulah Dalton Hodnett created this Life Tributes page to make it easy to share your memories.

Send flowers to the Hodnett family.