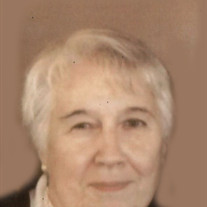 Brenda Barksdale Hudson, 77, of Rustburg died Sunday, October 21, 2018 Lynchburg General Hospital. She was the wife of the late Kenneth Wayne Hudson, Sr. for thirty-eight years. She was born July 26, 1941 in Brookneal, a daughter of the late... View Obituary & Service Information

The family of Brenda Barksdale Hudson created this Life Tributes page to make it easy to share your memories.

Send flowers to the Hudson family.