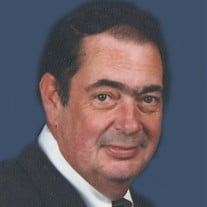 Charles Raymond Edwards, 73, a prominent citizen of Altavista, died January 30, 2018, at Lynchburg General Hospital. He was born in Lynchburg on September 3, 1944, to the late Raymond and Pauline Edwards of Altavista. He attended Altavista school, Hargrave Military Academy and Lynchburg College. In 1963, he began working at the family's business, Altavista Printing Company, former publishers of the Altavista Journal newspaper. He grew the company into what is now MidAtlantic Printers. He served on Altavista Town Council under four mayors including Ed Burton, Donald Holland, Rudy Burgess and Mike Mattox. Among his priorities was the arduous and complicated task of eliminating PCBs in the town's water resources. He also helped develop the town's economic development office. He was a long-time member of Lane Memorial United Methodist Church. He is survived by his wife of forty-seven years, Nancy Thompson Edwards; two sisters, Mrs. Betsy Woodward of Fairfax and Anne Word and her husband, Mike of Jefferson, TN; two sons, Raymond Jason Edwards of Altavista and Carter Thompson Edwards and his wife, Rebecca of Spout Spring; one daughter, Betsy Edwards Kerrigan and her husband, Patrick of Charleston, SC; one grandson, Jake Emerson Edwards of Gastonia, NC and his mother, Julie Kickham Edwards; as well as four nieces and ten nephews. A memorial service will be conducted at 11:00 a.m., Saturday, February 3, 2018 at Lane Memorial United Methodist Church, Altavista by the Rev. Ben Horrocks, followed by a private burial. The family will receive friends from 5:00 until 7:00 p.m., Friday at Finch and Finch Funeral and Cremation Service, Altavista. In lieu of flowers, donations can be made to Lane Memorial United Methodist Church, 1201 Bedford Ave., Altavista, VA 24517 or a charity of your choice. The family would like to thank Dr. Kevin Patel and the nurses of the Diabetic Renal Unit at Lynchburg General Hospital for their support and loving care. Please visit the online tribute at www.finchandfinchfuneralservice.com to share a memory or send a condolence to the family.

Charles Raymond Edwards, 73, a prominent citizen of Altavista, died January 30, 2018, at Lynchburg General Hospital. He was born in Lynchburg on September 3, 1944, to the late Raymond and Pauline Edwards of Altavista. He attended Altavista... View Obituary & Service Information

The family of Charles Raymond Edwards created this Life Tributes page to make it easy to share your memories.

Send flowers to the Edwards family.