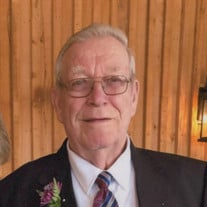 Curtis Elmo "Sam" Johnson, 88, of Hurt entered into his eternal Home on Saturday, February 13, 2021. He was the husband of Madeline Hamlett Johnson for 60 years. He was born November 26, 1932 in Pittsylvania County, a son of the late Clarence and Sallie Robertson Johnson. He retired from BGF, but decided retirement was not for him, he went back to work at Abbott, retiring at age 85. In addition to his wife, he is survived by one daughter, Cindy Johnson (Steve) of Hurt; two sons, Darrell Johnson (Ella) of Evington, and Steve Johnson (Barbara) of Forest; four grandsons, Derrick Johnson of Evington, Curtis Johnson (Emily) of North Carolina, Cory Johnson (Kayla) of Bedford, Eric Johnson (Tiffany) of Bedford; two great grandchildren, Haisley Johnson and Luke Johnson of Bedford; two brothers, J.C. Johnson of Hurt and Roy Johnson (Debbie) of Windfall; three sisters, Lucy Rollison of South Carolina, Mary Hudgins (Jim) of Lowry, and Gracie Brown (Jim) of Waynesboro. He was preceded in death by one granddaughter, Tabitha Ann Johnson; one brother, Ralph Johnson; and three sisters, Nancy Elizabeth Johnson, Peggy Moon, and Dorothy Moye. Curtis was raised on a farm where in life he became an avid gardener and tobacco farmer. He was quite the carpenter with many carpentry skills using them to build his home for his family and allowing his children along side him with hammers and nails. During his free time, he loved to catch a game of Virginia Tech football whether it be in the stadium or on the television. He was a loving husband, father, grandfather, and a proud U.S. Army veteran. A funeral service will be conducted at 11:00 a.m., Friday, February 19, 2021 at Finch and Finch Chapel, Altavista by the Rev. Ray Eure, Rev. Chuck Schooler, and Rev. Carlton Gunter with interment to follow in Altavista Memorial Park. The family will receive friends Friday, one hour prior to the service. The family suggests that those wishing to make memorials consider Alan B. Pearson Cancer Center, 1701 Thomson Dr, Lynchburg, VA 24501 or a charity of your choice.

Curtis Elmo "Sam" Johnson, 88, of Hurt entered into his eternal Home on Saturday, February 13, 2021. He was the husband of Madeline Hamlett Johnson for 60 years. He was born November 26, 1932 in Pittsylvania County, a son of the late Clarence... View Obituary & Service Information

The family of Curtis Johnson created this Life Tributes page to make it easy to share your memories.

Curtis Elmo &quot;Sam&quot; Johnson, 88, of Hurt entered into his eternal...

Send flowers to the Johnson family.