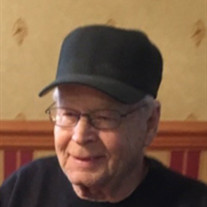 Danny Richard Logwood, 74 of 139 Troublesome Creek Road, Evington died Wednesday, June 26, 2019 at his home. He was the husband of Katherine Brown Logwood for fifty-three years. He was born November 26, 1944 in Lynchburg, a son of the late George Eugene Logwood and Stella Cox Hall. He was a retired employee of Babcock and Wilcox with thirty years of service and a U.S. Army veteran of the Vietnam War. Danny loved fishing, motorcycle riding, the New York Yankees and the Washington Redskins. In addition to his wife, he is survived by a son, Danny "Ricky" Logwood and his fiancé, Kay, who was extremely special and close to him, of Evington; a daughter, Michelle Lynn Logwood of Rustburg; three grandchildren, Brianna Lee Logwood, William Chandler Logwood, and Katherine "Gracie" Logwood; two brothers, Gaither Logwood of Lynch Station and Jerry Logwood (Lillian) of Bedford; a half-brother, Phillip Hall (Tracy) of Forest; two half-sisters, Linda Harvey of Rustburg and Robin Stratton of Lynchburg; an aunt, Irene Little of Evington; special sisters-in-law, Martha, Rosa (Wayne), Jo Ann, Helen, and Alice; brothers-in-law, Robert (Angie) and Louis (Gail); a great friend, Robert Evans; and fishing buddies, Wayne and Oscar. He was preceded in death by a half-sister, Caroline Riley; and his cherished aunt and uncle, Howard and Madeline Maxey, who raised him. A funeral service will be conducted at 2:00 p.m., Sunday, June 30, 2019 at Finch and Finch Chapel, Altavista by the Rev. Jeffrey Chapman. Interment will follow at the Brown Family Cemetery with military honors by American Legion Altavista Memorial Post 36 and Gretna Post 232. The family will receive friends from 6:30 until 8:00 p.m., Saturday at Finch and Finch Funeral and Cremation Service, Altavista and other times at the residence. The family suggests that those wishing to make memorials consider the Campbell County Humane Society, PO Box 659, Rustburg, VA 24588 or Liberty Baptist Church, 84 Nickland Dr., Evington, VA 24550. Please visit the online tribute at www.finchandfinchfuneralservice.com to share a memory or send a condolence to the family.

Danny Richard Logwood, 74 of 139 Troublesome Creek Road, Evington died Wednesday, June 26, 2019 at his home. He was the husband of Katherine Brown Logwood for fifty-three years. He was born November 26, 1944 in Lynchburg, a son of the late... View Obituary & Service Information

The family of Danny Richard Logwood created this Life Tributes page to make it easy to share your memories.

Send flowers to the Logwood family.