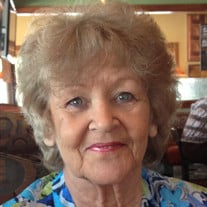 Dorothy Marsh Brooks, 84, of 1601 Melinda Drive, Altavista died Wednesday, February 2, 2022 at Centra Lynchburg General Hospital. She was the wife of Billy Owen Brooks for 52 years. She was born July 16, 1937 in Altavista, a daughter of the late John Melvin Marsh and Ressie Owen Marsh. She was the owner/operator of Dot's Beauty Bar for over 30 years. In addition to her husband, she is survived by one daughter, Teresa Almond and her husband, Finley of Madison Heights; one sister, Anne Mitchell of Forest; two grandchildren, Danielle Loder and her husband, Chris of Forest and Skylar Almond of Lynchburg; two great-grandsons, Ruah Loder and Daxie Loder who were the loves of her life, along with her cat, Punkin; a host of nieces and nephews; a special niece, Connie Marsh Brown and Ruth Cox, her caregivers who have both helped Dot and Billy tremendously. Her favorite past time was spending time with her family at every opportunity. She will be greatly missed by those whose lives she touched. She was preceded in death by four brothers, John Melvin Marsh, Owen Padgett Marsh, Jr., Lester Frank Marsh, Sr. and Theodore Ivanhoe Marsh; and two sisters, Grace Boley and Elva Irby. A funeral service will be conducted at 2:00 p.m., Monday, February 7, 2022 at Finch & Finch Chapel, Altavista by Minister Lory Brafford. The family will receive friends from 7:00 until 8:30 p.m., Sunday at Finch & Finch Funeral and Cremation Service, Altavista. The family suggests that those wishing to make memorials consider the American Lung Association, 9702 Gayton Road, #110, Richmond, VA 23238.

Dorothy Marsh Brooks, 84, of 1601 Melinda Drive, Altavista died Wednesday, February 2, 2022 at Centra Lynchburg General Hospital. She was the wife of Billy Owen Brooks for 52 years. She was born July 16, 1937 in Altavista, a daughter of the... View Obituary & Service Information

The family of Dorothy Marsh Brooks created this Life Tributes page to make it easy to share your memories.

Send flowers to the Brooks family.