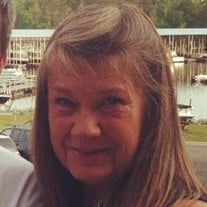 Drucilla Freeman Barbee died peacefully in her sleep on December 16, 2018 in Sugar Hill, Georgia after a courageous battle with cancer. She was born on March 27, 1950 in Roanoke, Virginia; the daughter of Margie Hodges Freeman and the late Wilbur (Bill) Freeman. In addition to her Father, she was preceded in death by a brother William Terrell Freeman; and two sisters, Donna Freeman Hawkins, and Patricia Freeman Amato. In addition to her mother, she is survived by her husband Zeb J. (Jerry) Barbee III of Sugar Hill, GA, two sons, Taylor Wade Barbee of Sugar Hill, GA, and Zeb J. Barbee IV, and his wife Crystal Barbee and grandson Zeb J. Barbee V of Buford, GA, her sister Anita Freeman Phillips and husband Tom Phillips of Altavista, VA, and her brother Bryan Freeman and wife Angela Freeman of Philadelphia, PA, and numerous beloved nieces and nephews, and great-nieces and great-nephews. After graduating from Altavista High School and CVCC, she worked for VEPCO in Altavista, VA, Duke Power in Charlotte, NC, and Georgia Power in Atlanta, GA. After her son Taylor was born with Down syndrome on March 9, 1985 Dru became a dedicated and relentless advocate for people with intellectual disabilities, especially Down syndrome. She was the convention coordinator and resource specialist for the National Down Syndrome Congress headquartered in Atlanta. She held national conventions across the United States in places like Los Angeles, Miami, Wichita, Pittsburg, Washington, DC, Atlanta, St. Louis, and Dallas. Dru then served as the Executive Director of the Down Syndrome Association of Atlanta for several years. Dru and Jerry fell in love in 1964 and were married in 1970. She was a loving wife to Jerry and a wonderful mother to her sons Taylor and Zeb. She enjoyed every weekend on her houseboat at Holiday Marina on Lake Sidney Lanier, just north of Atlanta, from 1981 until 2003. She was also a member of the Lake Lanier Ladies’ Society sorority. Prior to moving back to the Atlanta area in 2017 to be near her son Zeb IV, his wife Crystal, and grandson Zeb V, she was a devoted member of First Baptist Church in Altavista, VA where she served as a deacon, prepared communion, chaired the flower committee, taught Sunday school, and organized the Christmas decorations. Her wish is to be cremated and her ashes scattered over Lake Lanier along with her husband’s ashes. A memorial service will be held at the First Baptist Church in Altavista, VA on January 12 at 2 PM with Rev. Dr. Mike Lee officiating. The family will receive friends in the fellowship hall immediately following the service, and at all other times at the home of her mother, Margie Freeman at 100 Kent Circle, Hurt, VA. In lieu of flowers, she would like all who wish to honor her life to please consider the First Baptist Church in Altavista, VA. Flanigan Funeral Home and Crematory of Buford, Georgia is assisting the family.

Drucilla Freeman Barbee died peacefully in her sleep on December 16, 2018 in Sugar Hill, Georgia after a courageous battle with cancer. She was born on March 27, 1950 in Roanoke, Virginia; the daughter of Margie Hodges Freeman and the late... View Obituary & Service Information

The family of Drucilla Freeman Barbee created this Life Tributes page to make it easy to share your memories.

Drucilla Freeman Barbee died peacefully in her sleep on December...

Send flowers to the Barbee family.