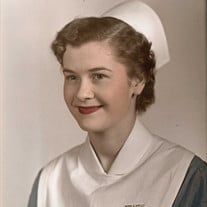 Edith Kelly Frazier, 85, of Altavista died Saturday, January 13, 2018 at Lynchburg General Hospital. She was the wife of the late Charles Scott "C.S." Frazier, Jr. for fifty-five years. She was born February 25, 1932 in Campbell County, a daughter of the late William James Kelly, Sr. and Frances Hall Kelly. She was a member of Mount Hermon United Methodist Church and a graduate of Lynchburg General School of Nursing as an RN. She worked for Dr. James P. Kent in his Piedmont General Hospital in Altavista until it closed. She went on to work at Lynchburg General Hospital until her retirement in 1992. In all she nursed for 40 years. Edith enjoyed reading, crossword puzzles and game shows. Later in her retirement she became a sports fan loving to watch baseball and football usually involving the Braves, Orioles and Yankees. But most of all she loved watching Virginia Tech whenever they were playing. She is survived by two sons, C. Scott Frazier, III and his wife Carol of Parkton, MD and Michael Kelly Frazier and his wife Rita of Altavista; a sister, Jean K. Woody-Granger and her husband Albert of Amherst; two grandsons, Charles Scott Frazier, IV and Lee Carter Frazier. She was preceded in death by seven siblings, Russell Kelly (Lennie), Bernice K. Dudley (Percy), Arlene K. Kilpatrick (Charlie), Dorothy K. Pilson (Roy), Violette K. Chisholm (Carson), William J. Kelly, Jr. and Patricia K. Charnock (Earl). A funeral service will be conducted at 2:00 p.m., Sunday, January 21, 2018 at Finch and Finch Chapel, Altavista by the Rev. Dr. Dawn Compton with interment to follow in Mount Hermon United Methodist Church Cemetery. The family will receive friends from 7:00 until 8:30 p.m., Saturday at Finch and Finch Funeral and Cremation Service, Altavista. The family suggests that those wishing to make memorials consider a gift in memory to the American Diabetes Association, www.diabetes.org . Please visit the online tribute at www.finchandfinchfuneralservice.com to share a memory or send a condolence to the family.

Edith Kelly Frazier, 85, of Altavista died Saturday, January 13, 2018 at Lynchburg General Hospital. She was the wife of the late Charles Scott "C.S." Frazier, Jr. for fifty-five years. She was born February 25, 1932 in Campbell County, a... View Obituary & Service Information

The family of Edith Kelly Frazier created this Life Tributes page to make it easy to share your memories.

Send flowers to the Frazier family.