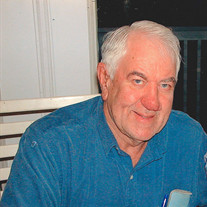 Edward (Bud) William Colligan (89) Green Street, Watertown, and later of Altavista, Virginia died October 19, 2017 in Altavista, VA. Besides his wife, Martha, Ed is survived by three daughters, Ellen Colligan, Lynchburg, VA; Cathy and Paul O'Callaghan, Altavista, VA; and Mary Colligan, Anchorage, AK; his son Bill and Bridgette Colligan, Vienna, VA; his five grandchildren and three great grandchildren; his brother Thomas and Patsy Colligan, Annandale, VA; and several nieces, nephews and godchildren. He was predeceased by his daughter, Sue Colligan, Jackson, WY. Mr. Colligan was born in Syracuse on January 31, 1928, the son of Edward J. Colligan and Marjorie Singer Colligan. He graduated from Watertown High School and enlisted in the US Navy on August 21, 1946. He served at NTC Great Lakes, IL on the USS Corry, and at NAS Pensacola, FL. He received the World War II Victory Medal and was honorably discharged as an electronics technician third class. Ed graduated with honors from Clarkson College in 1951 with a degree in Civil Engineering. On November 27, 1954, he married Martha Mary Morgan at St. Mary's Church in Potsdam with Rev. Joseph Tierney officiating. Ed worked in the construction industry all of his life, first with Deline Construction then forming Colligan Construction in 1984. He retired in 1992. He was very proud of the many hospitals, churches, and college campus buildings he built in the Watertown area. Ed was a communicant at Holy Family Church and a member of its Parish Council. He volunteered for Meals on Wheels and was a founding member of the Green Street Grasshoppers. He was a past President and member of the Northern NY Builders Exchange, director for 25 years of the Adirondack Carpenter's Pension Fund, and director and member of twin Falls Hunting Club. He was a long-time member of the American Legion Post 61. Ed loved the outdoors; hunting, fishing, cross-country skiing, biking, working around their home, and reading Watertown Times. He was a creative problem solver, always noticing engineering and construction advancements. A private memorial service will be held at the Family's convenience. There will be no calling hours. In lieu of flowers, donations may be made in his name to a charity of one's choice.

The family of Edward William Colligan created this Life Tributes page to make it easy to share your memories.

Send flowers to the Colligan family.