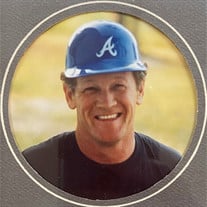 Everett Doyle Perry, 84, of 8392 Deer View Road, Gretna died Friday, February 18, 2022 at his home. He was the husband of Melanie Ramona Stallings for 43 years. He was born August 25, 1937 in Athens, GA, a son of the late Walter Ernest Perry and Addie Strickland Perry. In addition to his wife, he is survived by two sons, Keith Perry and his partner, DeDe of Hull, GA and Dustin Stallings-Perry and his wife, Heidi of Gretna; one daughter, Tracy Fowler of Commerce, GA; two sisters, Marion "Flossie" Sanders and her late husband, Robert of Winterville, GA and Barbara Ann Hammonds and her husband, Howard of Watkinsville, GA; sixteen grandchildren; sixteen great-grandchildren; four great-great grandchildren; and his beloved cats, Frito and Cheeto. He was preceded in death by two sons, Tony and Stanley Perry; four brothers, Cecil "Buddy" Perry, Dorsey Perry, Edward Perry and Bruce Perry; two sisters, Geneva Elder and Doris Perry. Everett was a Sergeant of the Uniformed Division of the City of Athens, GA Police Department for 12 years. After leaving Athens, he served as a law enforcement officer in various capacities including Campus Police for the College of Coastal Georgia. After retiring from the University System of Georgia, he started his own landscaping company. He mowed various lawns and wacked many weeds over the course of the next 13 years. He was an avid baseball player in his younger years, playing sandlot ball with his brothers throughout middle and north Georgia. As an outfielder, his explosive arm was legendary. He also enjoyed playing softball and spent a number of years coaching and umpiring youth baseball, leading his baseball team to the Little League State Championship in the early 1970s. He was a man of strong faith and he and his wife Melanie were founding members of Southside Baptist Church in Nahunta, Georgia. In his later years he enjoyed listening to Southern Gospel and cracking jokes with his family. With his arrival in Glory, Everett has finally been cured of his "bad case of CRS". A memorial service will be conducted at 2:30 p.m., Sunday, February 20, 2022 at Finch & Finch Chapel, Altavista by William E. Steed. The family will receive friends beginning one hour prior at the funeral home and other times at the residence. The family suggests that those wishing to make memorials consider Southside Baptist Church, 550 School Circle, Nahunta, GA 31553. Finch & Finch Funeral and Cremation Service, Altavista is in charge of arrangements.

Everett Doyle Perry, 84, of 8392 Deer View Road, Gretna died Friday, February 18, 2022 at his home. He was the husband of Melanie Ramona Stallings for 43 years. He was born August 25, 1937 in Athens, GA, a son of the late Walter Ernest Perry... View Obituary & Service Information

The family of Everett Doyle Perry created this Life Tributes page to make it easy to share your memories.

Send flowers to the Perry family.