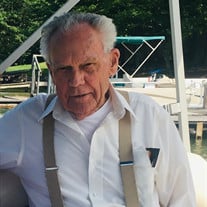 Frank Thornton Hodnett, 88, of Long Island, Virginia died Monday, January 18, 2021 at Centra Health Lynchburg General Hospital. He was born January 3, 1933 in Halifax County, a son of the late Frank Benjamin Hodnett and Lucille Glass Hodnett. He was the devoted husband of Emma "Patty" Martin Hodnett and they recently celebrated their 68th wedding anniversary on July 18th, 2020. Frank was the co-founder and owner of Frank's Place, Inc. of Long Island which began operation in 1947 and closed its door in 2013 after 66 years in business. During those over six decades it was clear that Frank had a passion for cars, business and conversation. He ran a very successful full-service auto parts and auto body business which allowed him to utilize all his many gifts to the fullest. Over the years he channeled his love of cars into the sport of stock car racing at South Boston Speedway in South Boston, Virginia where he sponsored and supported his son-in-law and grandson's racing teams. He also had a love of classic car restoration and spent many hours over the years devoted to this hobby. When he wasn't working, he could always be found surrounded by family and friends at home or on the lake. Over the years he loved to drive fast (anything fast), water ski, jet ski, tube, play croquet and of course school anyone willing to play against him in a game of cards, any cards. To all who knew him it was evident that he had never met a stranger in his entire life and he had an infectious laugh and smile that made you feel like you had known him all your life. He would also tell the most wonderful stories of days gone by, his favorite cars, the way things used to be and all of the trouble he may or may not have gotten into. In addition to his wife he is survived by one son, Frank Randall Hodnett of Long Island, VA, one daughter, Rebecca Hodnett Worley and her husband Steve of Daytona Beach, FL and one granddaughter by birth but daughter in heart, Kimberly Carwile-Watson and her husband Rob of Lynchburg, VA; one sister Freda H. Yeatts and her husband Winfred of Lynchburg; two additional grandchildren, Scott Worley (Tabitha) and Evan Hodnett (Lisha Jo); seven great-grandchildren, Justin Carwile (Stephanie), Lauren Carwile, Jason Carwile, Brooke Worley, Blake Worley, Addison Hodnett and Dalton Hodnett; and one great-great-grandson Landon Carwile. He is also survived by two special nieces-in-law; Barbara Irby (Clarence) and Joan Grishaw (Roger). He was preceded in death by one granddaughter Megan Hodnett; two sisters, Ann Cunningham Jamerson and Georgia Webber Frye; and two brothers, Hubert and Michael Wayne Hodnett. A funeral service will be conducted at 2:00 p.m., Thursday, January 21, 2021 at Kedron Baptist Church, Gladys, (where he was a member) by the Rev. Shelton Miles with interment to follow in the church cemetery. In lieu of family visitation, viewing will be available from 9:00 a.m. until 9:00 p.m. on Wednesday at Finch and Finch Funeral and Cremation Service, Gladys. The family suggests that those wishing to make memorials consider Kedron Baptist Church, P.O. Box 38, Gladys, VA 24554, or St. Jude Children's Research Hospital, 501 St. Jude Place, Memphis, TN 38105-9956.

The family of Frank Thornton Hodnett created this Life Tributes page to make it easy to share your memories.

Send flowers to the Hodnett family.