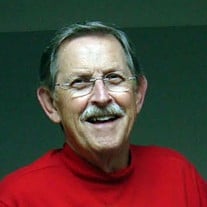 Mr. Franklin "Frank" Ray West, 81, died on Thursday, September 19, 2019, at Wake Forest Baptist Health after a 10-month battle with cancer. Frank was born in Altavista, VA, on January 30, 1938, to John Willard and Ada Elizabeth Arthur West. He grew up in Virginia, and furthered his education by obtaining his Associates Degree in Business from Emmanuel College in Franklin Springs, GA. After graduating he returned to Virginia to start his sales career with Lane Furniture. During his time in Virginia he met and married Susan, the love of his life and they started a family. Frank and Susan attended Central Baptist Church in Altavista until moving to North Carolina in 1979, when they joined Calvary Baptist Church. Upon moving to North Carolina, Frank continued his career as a salesman with Modern Automotive. He was a genuine auto enthusiast with an extensive knowledge of cars. Frank also enjoyed golfing, playing the trumpet, and singing with the church choir. He was very musically talented and was asked to perform at many weddings and events. Frank got along with everyone, was very personable, and loved by all. He will be dearly missed. In addition to his parents, he was preceded in death by one brother, Rudolph West; and two sisters, Clara Clay and Helen Shelton. Surviving are his loving wife of 52 years, Susan Oakes West of Winston-Salem, NC; son, Scott West of Boston, MA; grandsons, Kenneth West and Thomas West of Boston, MA; brother-in-law, Tony Oakes, of Lynch Station, VA; special niece, Dorinda Scruggs of Hurt, VA; special nephew, John Beverly West of Atlanta, GA; many more nieces and nephews; a loving church family, and a host of cherished friends. A graveside service will be held at 1:00 p.m. on Friday, September, 27, 2019, at Green Hill Cemetery in Altavista, VA. In lieu of flowers, memorials may be made to the American Heart Association, 10 Glenlake Pkwy NE South Tower Suite 400, Atlanta, GA 30328 or the American Cancer Society, P.O. Box 22478, Oklahoma City, OK 73123. Finch and Finch Funeral and Cremation Service, Altavista is in charge of arrangements.

The family of Franklin Ray "Frank" West created this Life Tributes page to make it easy to share your memories.

Send flowers to the West family.