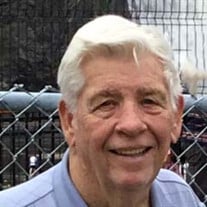 CMSGT George H. Day George Harry Day, 81, of Altavista, VA passed away on Friday, February 19, 2021 at Centra Lynchburg General Hospital, Lynchburg, VA. He was the husband of Carol Ann Charland Day for 60 years. He was born on March 22, 1939 in Portland, ME, the son of Robert Emerson Day and Winona Rose McAllister Day. In addition to his wife, he is survived by his daughter, Debra Ann Bivens and her husband Norman of Semora, NC, his son Robert William Day and his wife Julie of Tellico Plains, TN and his daughter, Brenda Marie Day of Altavista, VA; a brother Edward Day and his wife Dawn of New Bern, NC, a sister Marlene Russell of Yarmouth, ME; a sister in law, Judy Day of South Portland, ME; grandchildren Jason Bivens, Katherine Bivens Adams and husband Harley, Lindsay Bivens; Jeffrey Robert Day and his wife, Emily, Courtney Leigh Day and Morgan Ashley Day; two great grandchildren, Sev Hutton and Eloise Day, and while awaiting the birth of Jeffrey Wilder Day. He was preceded in death by his brother Roger Day; and good friend Hubert Davis of Maryville, TN. George grew up traveling on a steam engine with his brother and his grandfather, Harry D. McAllister, the train's engineer, from South Portland, ME to South China, ME to spend time on his grandparent's farm. When he grew older, he became a football player for South Portland High School and was an offensive lineman. It was there that he met the love of his life and Head Majorette, Carol Charland. He also worked on a tugboat in Portland Harbor and delivered oil for Harris Oil Company. After graduating from South Portland High School in 1958, he joined the United States Air Force on August 23, 1959. He served as a Weather Observer at Niagara Falls, New York. George and Carol were married on August 28, 1960. While in the Air Force, his military career sent him to New York, North Carolina, Illinois, New Hampshire, and Washington, DC and included a year of service in Vietnam. In 1972, he became an instructor at the I.G. Brown Professional Military Education Center at McGhee Tyson Air Base, Maryville TN. In 1980, he was selected as one of six outstanding Non-Commissioned officers of the Air National Guard and was awarded the PMEC Instructor of the Year. At the PMEC, he and others developed strategies for Career Retention, many of which are still being implemented today. He was named Air Force Senior Career Adviser at the Air National Guard Support Center at Andrews AFB until 1983. Among the awards and decorations he received were the Airman's Medal, Bronze Star, USAF Commendation Medal with two bronze clusters, the Vietnamese Instructor Honor Medal and the Meritorious Service Medal. Desiring to further his education, George earned a BS in Education in 1976 and a MS in Technical and Adult Education in 1984 from the University Tennessee. After retiring from the United States Air Force as a Chief Master Sergeant with 26 years of service, George continued to teach and train others. At Tennessee Associates Incorporated, he served as a consultant to several large corporations including Amtrak, Healthy Choice and ConAgra. He worked with ALCOA in the training and implementation of a new continuous rolling mill in the plant until 1992, when he retired a second time. George and Carol began traveling in their RV, and desired to see as much of the country as they could. Serving as Foretravel RV Directors, they led tours and RV caravans across the US and Canada. They traveled for the next seven years making many friends along the way. Finally deciding to plant roots, they settled in Altavista, VA to be close to family. Not one to sit around, George was interested in helping start Virginia Technical Institute (VTI.) He became the school's first instructor and then Dean of Curriculum and Instruction. He was quoted in an article in the Altavista Journal as saying, "a teacher has to be someone who sees ability in others, encourages them to take advantage of their natural skills and then motivates them to figure out what to do with the rest of their lives." More than anything, George loved to tell stories of the past and bring it to life for his family and friends, preserving it for all of us. He will be deeply missed by all who knew him. A celebration of his life will be held at a later date. The family suggests those wishing to make memorials consider St. Jude Children's Research Hospital, 501 St. Jude Place, Memphis, TN 38105-9956. Finch and Finch Funeral and Cremation Service, Altavista is in charge of arrangements.

The family of George Harry Day created this Life Tributes page to make it easy to share your memories.

Send flowers to the Day family.