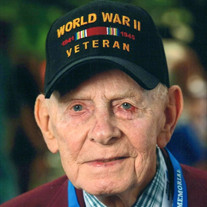 George W. "GW" Goodman Jr. 96, of Gladys passed away on September 10, 2020. Born March 29, 1924 in Lynch Station to George W. Goodman Sr. and Ester EuLalia Goodman, he was the oldest of 7. He is survived by the love of his life for over 70 years Verna Crews Goodman of Lynchburg, son Rick (Sharon) of Cary, NC, daughters Vicki Pick (Gary), and Denise Speas of Lynchburg, and Stefanie Morgan (Sam) of Concord. Grandchildren Sam Terry (Laura Beth) and Rick Terry of Nathalie, Melinda Terry and Becky Reynolds (Justin) of Gladys, Max Goodman and Rachel Goodman of North Carolina and Zack Morgan of Concord. Great grandchildren Tori Terry of Gladys, Greysen, Montana and Brady Terry of Nathalie and Seth and Adley Reynolds of Gladys, one brother-in-law Bobby (Sue) Crews of Lynchburg. Also surviving are numerous nieces and nephews. He was preceded in death by his parents, brothers Walter and Clyde, sisters Jewel, Hilda, Louise and Rachel and their respective spouses. Dad was a lifelong member of Mt. Herman Baptist Church in Lynch Station where he was baptized at a young age. Dad loved his Lord and Savior. Dad served in the United States Army during WWII from 1943-1946. He was a proud member of the 567th Anti Aircraft Artillery Battalion Automatic Weapons unit. He was awarded battle stars for his participation in the Northern France, Central Europe, The Ardeannes Offensive (Battle of the Bulge) and the Rhineland Campaign. Dad served in General George Patton's 3rd Army the last 5 ½ months of the war. His battalion was the first American unit to arrive at the Rhine River from Mainz, Germany. Upon learning of the end of the war his battalion celebrated a bit too much when a 40 mm cannon was fired and went through General Patton's office tent with him inside. Thankfully, it didn't explode. He served 18 months in Yokohama-Tokyo Japan in the Army Judge Advocate General's office in the War Claims Division. He was a graduate of Virginia Commercial Business School, Lynchburg College and Longwood College and taught at William Campbell High School for over 30 years. Dad taught stenography, typing, business, history, math and anything else they needed someone to teach. Dad was a talented musician who played most any instrument he picked up. The guitar and trumpet were his favorites. He played music with multiple bands for over 60 years. He played a lot of Dixieland and Big Band music and was given the nickname Little Benny referring to Benny Goodman. Dad loved fishing, hunting, and gardening and instilled this love in his family. Dad loved baseball, being a Washington Nationals fan going back to when they were the Washington Senators. As much as Dad loved all of these things, he most loved his wife and family including his special friends, caregivers for Mom and neighbors. Dad truly was a teacher in every way, teaching all of us so many things about life and what's truly important. Thanks Dad. We miss you terribly. The funeral service will be at Finch and Finch, Inc. in Altavista Thursday September 17 at 12 with burial at Spring Hill Cemetery. Service officiated by Chris Brooks. Visitation will be 2 hours prior to the funeral service, and other times at the home of Stefanie and Sam at 8458 Spring Mill Rd, Concord. In lieu of flowers please consider the following charities: Alzheimer's Association 225 N. Michigan Ave., 17th Fl. Chicago, IL 60601, National D-Day Memorial P.O. Box 77, Bedford, VA 24523 or The Ward Burton Wildlife Foundation P.O. Box 519, Halifax, VA 24558. Finch and Finch Funeral and Cremation Service, Altavista is in charge of arrangements.

George W. "GW" Goodman Jr. 96, of Gladys passed away on September 10, 2020. Born March 29, 1924 in Lynch Station to George W. Goodman Sr. and Ester EuLalia Goodman, he was the oldest of 7. He is survived by the love of his life for over... View Obituary & Service Information

The family of George Washington Goodman Jr. created this Life Tributes page to make it easy to share your memories.

Send flowers to the Goodman family.