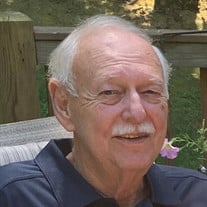 Harold Thornton Cothran, Jr., 83, of Moneta died Sunday, January 16, 2022, at Centra Lynchburg General Hospital. He was born November 16, 1938, in Lynchburg, a son of the late Harold Thornton Cothran, Sr. and Kathryn Doss Cothran. He was a very proud graduate of Virginia Tech where he received his degree in business and studied engineering and was a member of the Hightie Tighties band and played the saxophone. He also served in the Coast Guard Auxiliary. Harold was a Hokie Club member and an avid VA Tech fan for over 50 years. His favorite VT football activity was preparing and drinking a Bloody Mary. For his 80th birthday Harold got to meet the Hokie Bird. He married Shirley Harman and had two daughters that have survived him, Karen Cothran George of Altavista and Dawn Cothran Hatcher married to Bruce Hatcher of Raleigh, NC; four grandchildren, James George, Joshua George, Christian Hatcher, and Dustin Hatcher; and fiancé, Sandra Robertson of Gretna. He was preceded in death by a brother, John David Cothran and survived by David's wife Ashby Cothran. Harold was the President of J.H. Cothran in Altavista. Over his career he was a leader and mentor to hundreds of people in the contracting business. In 2001 he joined Kreider, Ayers & Associates, now Kreider Mechanical, Inc., as Vice President and Estimator. Harold loved contracting and was tireless when it came to estimating. He loved that part of the business and was excellent at it. In 2009 Harold decided to retire. Retirement lasted about 6 weeks. Harold returned to "part time" work which continued up until a few days before his recent hospitalization. He could not play enough golf to stay as busy as he wanted. Also, he did not play in the cold. Golf was a warm weather sport to Harold. During his contracting career he served as President of the VA Associated General Contractors and was active in the Plumbing Heating & Cooling Contractors. Harold loved listening to beach music, beach music concerts and dancing with "his darling" Sandra. He also greatly enjoyed trips to Ocean Isle Beach. Harold loved the game of golf and spent much of his free time with friends and his brother David on the golf course. Harold's problem with golf was his "practice swing" was far better than his "actual swing." When discussing a specific event in the past the conversation usually started with "I was driving a… He always knew the make, model, color, and size engine of the car he was driving. He had an amazing memory!! He also loved boating and loved to pull his kids and their friends skiing. It would not be surprising to see his boat with 5 or 6 girls skiing behind at one time. He was definitely one of the original Girl Dads. He will be remembered most for his love of his family and friends, southern gentleman nature and die-hard support of the Virginia Tech Hokies. Harold always had time to help someone whether it was business related or personal. Once your friend he was your friend forever. Not a huge fan of technology, he would use voicemail and you always knew when it was Harold because his messages always started "Hey partner, this is Harold." Or "hey girls, this is Dad." A funeral service will be conducted at 2:00 pm., Monday, January 24, 2022, at Lane Memorial United Methodist Church by the Rev. Ben Horrocks with interment to follow in Green Hill Cemetery. The family will receive friends from 4:00 until 5:30 p.m., Sunday at Finch & Finch Funeral and Cremation Service, Altavista. The family suggests that those wishing to make memorials consider a donation to JDRF - Juvenile Diabetes Research Foundation, 3805 Cutshaw Ave., Richmond, VA 23230 or Multiple Sclerosis Society, 1100 New York Ave., Ste. 600, Washington, DC 20005.

The family of Harold Thornton Cothran Jr. created this Life Tributes page to make it easy to share your memories.

Send flowers to the Cothran family.