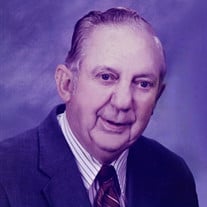 Howard Noten Bolling, 96, of 265 Perdue Drive, Hurt, died Thursday, May 17, 2018 at Lynchburg General Hospital. He was the husband of Virginia Clarice Worsham Bolling for 72 years. He was born October 13, 1921 in Pittsylvania County, a son of the late Henry Noten Bolling and Lillian Toler Bolling. He was a member of the Altavista Church of Christ where he was in the choir for over 64 years and a retired employee of 38 years at The Lane Company. In addition to his wife, he is survived by a daughter in law, Cindy Hedrick Stone of Altavista; two grandchildren, Jeffrey Alan Bolling and his wife Laura and Stacey Bolling Tribbett and her husband Richard; and six great-grandchildren, Logan Bolling, Wyatt Bolling, Avery Bolling, Cody Tribbett, Connor Tribbett and Chase Tribbett. He was preceded in death by a son, Alan Howard Bolling; a sister, Ora Bolling Rowland; and two brothers, James "Jimmy" Bolling and Lawson Bolling. A funeral service will be conducted at 11:00 a.m., Monday, May 21, 2018 at the Altavista Church of Christ by Larry Evans, Minister and Lory Brafford, Minister with interment to follow in Altavista Memorial Park. The family will receive friends at the residence. The family would like to thank Janet Crouch, a great friend and neighbor for all the help and support. The family suggests that those wishing to make memorials consider Altavista Church of Christ Building Fund, 1301 Avondale Drive, Altavista, VA 2417. Finch and Finch Funeral and Cremation Service, Altavista is in charge of arrangements.

Howard Noten Bolling, 96, of 265 Perdue Drive, Hurt, died Thursday, May 17, 2018 at Lynchburg General Hospital. He was the husband of Virginia Clarice Worsham Bolling for 72 years. He was born October 13, 1921 in Pittsylvania County, a son... View Obituary & Service Information

The family of Howard Noten Bolling created this Life Tributes page to make it easy to share your memories.

Send flowers to the Bolling family.