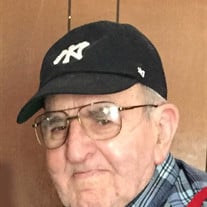 James Thomas "J.T." Hensley, 86, of Altavista, passed away peacefully Thursday, August 27, 2020 at Centra Virginia Baptist Hospital. He was the husband of Peggy Conner Hensley for 63 years. He was born September 4, 1933 in Evington, a son of the late Robert William Hensley and Martha Roberta Hackworth Hensley. He was a retired employee of Vaughan's Tire and Appliance. He served in the U.S. Army and was a past member of the Evington Ruritan Club. J.T. was raised on "The Hensley Farm" in Evington, VA. He was a graduate of New London Academy and loved telling stories about the "good ole' days". After serving in the Army, he became a salesman and gained many loyal customers and friends over the years. He loved the outdoors and many times he would just sit and marvel at the beauty of God's world. In addition to his wife, he is survived by his daughter, Rose Hensley Saunders of Altavista; two grandsons, Lane Thomas O'Brien and Winston Cullen O'Brien both of Altavista; one granddaughter, Victoria Margret Saunders his "little darlin" of Altavista; two sisters, Agnes Anderson (William) of Altavista and Christine "Peanut" Burley of Hampton; one brother, Kenneth "Pop" Hensley (Mary) of Evington; and numerous nieces and nephews. He was preceded in death by five brothers, William "Bill" Hensley, Herbert "Joe" Hensley, Shirley "Tater" Hensley, Charles "Punch" Hensley, and Clarence Ray Hensley; and four sisters, Lois H. Goodman, Elsie H. Boley, Virginia H. Tweedy Gay, and Florence "Penny" Hensley. The family would like to thank his home care nurse Teresa Turner, RN and Dr. Kevin Patel at Centra Alan B. Pearson Regional Cancer Center for their compassionate and loving care. A graveside service will be conducted at 2:00 p.m., Sunday, August 30, 2020 at Green Hill Cemetery by the Rev. Eddie Graves. The family will receive friends from 7:00 until 8:30 p.m., Saturday at Finch and Finch Funeral and Cremation Service, Altavista. The family suggests that those wishing to make memorials consider The Alan B. Pearson Regional Cancer Center, 1701 Thomson Drive, Lynchburg, VA 24501. Please visit the online tribute at www.finchandfinchfuneralservice.com to share a memory or send a condolence to the family.

James Thomas "J.T." Hensley, 86, of Altavista, passed away peacefully Thursday, August 27, 2020 at Centra Virginia Baptist Hospital. He was the husband of Peggy Conner Hensley for 63 years. He was born September 4, 1933 in Evington, a son... View Obituary & Service Information

The family of James Thomas Hensley created this Life Tributes page to make it easy to share your memories.

Send flowers to the Hensley family.