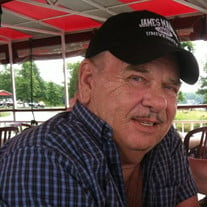 James Aubrey Mattox, age 77, of 120 Mt. Airy Road, Lynch Station died Tuesday, June 5, 2018 at his residence. He was the loving husband of Nora Peters Mattox for thirty-two years. He was born March 1, 1941 in Campbell County, a son of the... View Obituary & Service Information

The family of James Aubrey Mattox created this Life Tributes page to make it easy to share your memories.

Send flowers to the Mattox family.