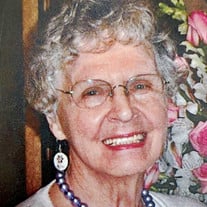 Janet Eileen Faris Sodders, 93, went home to be with her Lord Jesus Christ on 13 March 2022. Janet was the oldest daughter of Audrey Lucille Staats Faris and Jesse Oren Faris. She was preceded in death by her parents, a sister Ruth Husmann, and by her husband Jerry Lee Sodders. Janet was born in Dayton, Ohio, two days before her husband, Jerry Lee Sodders, also of Dayton. They first started dating in high school and were married in July, 1950. Janet and Jerry moved to Troy, Ohio where they lovingly raised four children: Susan Sodders Dettman, David Sodders, Brian Sodders, and Steven Sodders. Jerry and Janet moved to Altavista, Virginia in 1979. They were active members of the Altavista Presbyterian Church. Both Jerry and Janet were deacons there and spent many years ministering to, and being ministered to by, their fellow church members. Janet was also on the board of DAWN, a community Christian outreach ministry, for many years, providing help to people in need in Altavista and surrounding towns. Janet was a loving friend to many in her community and the bedrock home to her children, and many grandchildren and great grandchildren. She had a marvelous green thumb and created wonderful gardens wherever she lived. She also made a loving home for the many pets and wild creatures her kids brought home. Janet truly was a beautiful person and a loving friend to everyone she met. We are proud and so blessed to have had her as our mother, even if she didn't always get our names right. Janet is survived by her sister Nancy Arlene Gadbow and her children, the children of her sister Ruth, her children Susan and Tom Dettman, David Sodders and his wife Jane, Brian Sodders and his wife Dot, and Steve Sodders. Her grandchildren are Brian Sodders and his family, Kate Sodders and her family, Nate and Chris Sodders, Stephen Dettman, Jennifer Sodders, Sarah Ellison and her family, Megan Payne and her family, and her many wonderful great grandchildren. Special thanks go to brothers Steve and Brian Sodders for faithfully caring for both Mom and Dad in their last years. A funeral service will be conducted at 2:00 p.m., Saturday, March 19, 2022 at Altavista Presbyterian Church by the Rev. Eduardo Soto. Interment will be private. The family will receive friends following the service at the church and other times at the residence. In lieu of flowers, memorial contributions may be directed to the Altavista Presbyterian Church, P.O. Box 126, Altavista, VA 24517. Finch & Finch Funeral and Cremation Service, Altavista is in charge of arrangements.

Janet Eileen Faris Sodders, 93, went home to be with her Lord Jesus Christ on 13 March 2022. Janet was the oldest daughter of Audrey Lucille Staats Faris and Jesse Oren Faris. She was preceded in death by her parents, a sister Ruth Husmann,... View Obituary & Service Information

The family of Janet Eileen Faris Sodders created this Life Tributes page to make it easy to share your memories.

Janet Eileen Faris Sodders, 93, went home to be with her Lord...

Send flowers to the Sodders family.