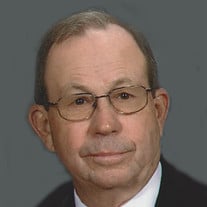 Jimmy Thomas "J.T." Eades, Jr., 78, of 2332 Grit Road, Hurt died Wednesday, June 26, 2019 at his home. He was the husband of Sallie Pillow Eades for fifty-three years. He was born July 23, 1940 in Altavista, a son of the late Jimmy Thomas Eades, Sr. and Lottie Tucker Eades. He was an active member of Monte Vista Baptist Church, U.S. Army Veteran and a retired employee of over 42 years at BGF in Altavista. "J.T." always loved sports. He played senior softball on several different teams, until the age of 77, most recently with the Burlington Classics Softball Team. In addition to his wife, he is survived by three sons, Thomas Eades and his wife, Ann of Hurt, Blaine Eades of Hurt and Justin Eades and his wife, Diane of Lynchburg; a daughter, Elizabeth Creasy and her husband, Donnie of Hurt; three brothers, Russel "Butch" Eades and his wife, Melissa, Curtis Eades and his wife, Donna and Wayne Eades all of Hurt; a brother-in law, Curtis Leffue of Hurt; eight grandchildren, J.T. IV, Josh, Grace, Caroline and Meredith Eades, Donovan, Jackson and Lydia Creasy, and a number of nieces and nephews. He was preceded in death by a two sisters, Nancy Simpson and Shirley Leffue. A funeral service will be conducted at 2:00 p.m., Saturday, June 29, 2019 at Monte Vista Baptist Church by the Rev. Wyatt Miles, IV and Rev. Latta Terry with interment to follow in the church cemetery with military honors by American Legion Altavista Memorial Post 36 and Gretna Post 232. The family will receive friends from 2:00 until 4:00 and 7:00 until 8:30 p.m., Friday at Finch and Finch Funeral and Cremation Service, Altavista and other times at the residence. The family suggests that those wishing to make memorials consider The Salvation Army, 2215 Park Ave., Lynchburg, VA 24501.

The family of Jimmy Thomas "J.T." Eades, Jr. created this Life Tributes page to make it easy to share your memories.

Send flowers to the Eades family.