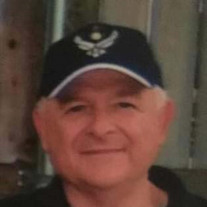 John Stephen Banyi, 81, of Lynch Station, died Friday, May 31, 2019 at his home surrounded by his family. He was the devoted husband of the love of his life, Mary Jane Brady Banyi for 52 years. He was born March 18, 1938, in the Bronx, NY and survived by his mother, Helen Kulls Bangi and sister, Alvina Klatt, both of Danville. John was a retired U.S. Air Force Major who exemplified duty, honor, country as he served honorably around the world as a communications officer. He was a member of St. Victoria Roman Catholic Church, the American Legion, and various other organizations. He loved baseball - watching, playing (stickball and softball), umpiring, and managing teams. John valued education, both academic and technical, and was a lifelong learner who brought his enthusiasm of economic concepts to the classes he taught at CVCC. In addition to his wife, mother and sister, he is survived by his three children, Denise Mills of Manassas, Monica Banyi of Spokane, Washington, and Drew Banyi (Angie) of Lost Creek, West Virginia; his six grandchildren: Madeline and Aidan Mills, Ashley Painter, and Kaylee, Casie, and Brady Banyi; great grandchildren: Athena Gonzalez and Noah Welcher; and numerous nieces and nephews. The family will hold a Celebration of Life on June 22, 2019 at 12pm at St. Victoria Catholic Church in Hurt, Virginia. At a later date, his interment will be at Arlington National Cemetery. Those wishing to make memorial donations in John's name, please consider the Bladder Cancer Advocacy Network (BCAN) (www.bcan.org) and the Campbell County Humane Society, P.O. Box 659, Rustburg, VA 24588. The family wishes to thank Gentle Shepard hospice as well as Vivian Farmer and her team for their compassionate care and support of John and his family. Finch and Finch Funeral and Cremation Service, Altavista is in charge of arrangements.

John Stephen Banyi, 81, of Lynch Station, died Friday, May 31, 2019 at his home surrounded by his family. He was the devoted husband of the love of his life, Mary Jane Brady Banyi for 52 years. He was born March 18, 1938, in the Bronx, NY... View Obituary & Service Information

The family of John Stephen Banyi created this Life Tributes page to make it easy to share your memories.

Send flowers to the Banyi family.