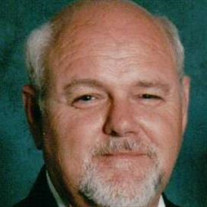 Did you know him? How will you remember him? J.B. went home to be with his Lord and Savior on July 11, 2018. Many will miss him, and many will treasure their memories of the great times spent with him. He touched the life of all who knew him. He was known as a wonderful spouse to his wife of 43 years, Wanda Rowland Moon. He was known as POPZ to his sons, Jonathan and Nicholas and his daughter in law, Ashley. As a family they had many treasured times of fun, cookouts, vacations and just great times spent as a Christian family. The entire Moon family will truly miss him but will all treasure their memories of time spent with him. His five grandchildren, Shaun, Lauren, Sarah, Logan and Sam loved and knew him as POPPA. The boys were always Poppa's buddies and the girls were Poppa's little angels. He enjoyed all of the time he spent with them and the memories that they made. He was a loving caregiver as needed for them as well as a fun time POPPA. He would play games with them over and over as long as they wanted to. They will treasure their memories of time spent with him. You might know him as J.B. I did…He was one of my best friends since I married his cousin Leslie. I know he is rejoicing in heaven with his mother, Mildred and his father, Bunyan. They are reunited along with his sisters, Barbara Jean and Carolyn. They have great memories of life on the farm. Working hard and good times spent with family. His brother Dwain will also treasure his memories of times growing up with J.B. His older brother and someone he could look up to as being a good person and who loved his family. You might remember him as Mr. Moon. Maybe he was one of your favorite teachers? He taught Marketing at the Appomattox County High School and the Gretna High School for 33 years. He was the BETA Sponsor, worked the football games, coached track and field and was a dedicated band booster for many years as well. His students would just drop in to visit him most any time after he was unable to teach any longer. He was dedicated to the students and teaching. He never forgot a one of them and was always happy to see them pull in the driveway or out and about in town. You might remember him as Brother J.B. If you attended Edge Hill Baptist Church or the many surrounding churches. He served for many years as a Deacon as well as the choir director for over 30 years and his choir made many trips singing at various local churches. His love of Christian music carried him through the hard times. You might have been his customer at Food Lion. Yes, he not only taught Marketing….he did it too! He worked for the local Food Lion in Altavista for several years. And lastly, if you didn't know him…if your paths did not cross…you have missed one of the greatest blessings. He was such a special person in the lives of those who knew him. A funeral service will be conducted at 2:00 p.m., Sunday, July 15, 2018 at Edge Hill Baptist Church, Hurt by the Rev. Joe Cornell with interment to follow in the church cemetery. The family will receive friends from 7:00 until 8:30 p.m., Saturday at Finch and Finch Funeral and Cremation Service, Altavista and other times at the residence. The family suggests that those wishing to make memorials consider a charity of your choice.

Did you know him? How will you remember him? J.B. went home to be with his Lord and Savior on July 11, 2018. Many will miss him, and many will treasure their memories of the great times spent with him. He touched the life of all who knew him.... View Obituary & Service Information

The family of John Bunyan "J.B." Moon, III created this Life Tributes page to make it easy to share your memories.

Did you know him? How will you remember him? J.B. went home to...

Send flowers to the Moon family.