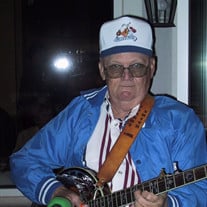 John Dave Smith, 82, of 1841 Grit Road, Lot 24, Hurt died Saturday, September 4, 2021 at his home. He was born January 10, 1939 in Ringgold, a son of the late William White Smith, Sr. and Martha Jane Wood Smith. John was an amazing self-taught accomplished banjo player, guitar and electric guitar musician. He was a country and bluegrass musician in the surrounding areas of Roanoke, Bedford, Huddleston, Lynchburg, Danville and many other places. Johnny played banjo on the Top of the Morning Show in 1963 with Don Reno for 10 weeks while Red Smiley was recovering from an illness. Reno played guitar and Smith played banjo. Johnny also played with the Country Capers at the Virginia Barn Dance and at areas around Roanoke in the early to mid-60's. He played with bands The Dixieland Express and in 1983 cut an album with them called Cool Brisky Dawn and with the Sprouse Brothers made a gospel cassette. John just loved playing music and played with Wayne Keys and the Bluegrass Rose in Bedford, Huddleston, Altavista and surrounding churches, Moose Clubs and nursing homes. He was a sweet man with a keen sense of humor and a deep sense of family. He was an inspiration to musical talent and music lovers alike. He made great music and gifted it to the community. Many are proud to have known him, to be his friend, and to create music with him. He is survived by his wife, Lessie M. Smith of Bedford; one son, Jason Smith of Ringgold; one daughter, Wanda Cobb and her husband, Nigel of Seminole, FL; two granddaughters, Valerie Tate Snead of Ringgold and Sarah Rivero of Danville; three great grandchildren, Courtney Pickral (Jonathan Shelton) of Hailfax, Christian Snead (Kristina) and Cameron Snead; and four great-great grandchildren. He was preceded in death by one sister, Ora Smith Brammer; and four brothers, Larry, Raleigh, Frank and William Smith, Jr. A funeral service will be conducted at 11:00 a.m., Friday, September 10, 2021 at Finch and Finch Chapel, Altavista by the Rev. Ronald Smith with interment to follow in Altavista Memorial Park. Johnny's family invites all guest to dress casually in western attire. The family will receive friends from 7:00 until 8:30 p.m., Thursday at Finch and Finch Funeral and Cremation Service, Altavista. The family suggests that those wishing to make memorials consider the International Myeloma Foundation, 12650 Riverside Drive, Suite 206, North Hollywood, CA 91607. Finch and Finch Funeral and Cremation Service, Altavista is in charge of arrangements.

The family of John Dave Smith created this Life Tributes page to make it easy to share your memories.

Send flowers to the Smith family.