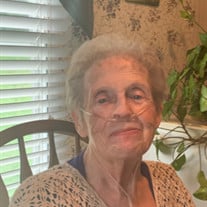 Judy Greene Steadman, 79, of 2461 Lone Jack Road, Lynchburg died Sunday, March 6, 2022 at her home. She was the wife of Jerell Steadman for 47 years. She was born August 12, 1942 in Banner Elk, NC, a daughter of the late Fornie S. Greene and Ruby Caldwell Greene. She was a charter member of Clearview Baptist Church and a homemaker. In addition to her husband, she is survived by one son, Tim Braswell (Mary) of Lynchburg; one daughter, Sherri Coflin (Jonathan) of Rustburg; one sister, Gail Brown (Louis) of Rustburg; six grandchildren, Nathan Braswell, Logan Rossi (Brian), Devon Grutter (Mike), Sidney Braswell, Elijah Braswell and Gabby Coflin; seven great-grandchildren; a niece, Lisa Abbott (Gary); and three nephews, Michael Brown, Danny Greene (Robin) and Stephen Brown (Heather) She was preceded in death by a son, Mark Braswell; two brothers, Billy Joe Greene and Rev. Wayne Greene; and one sister, Sandra Sue Greene. A funeral service will be conducted at 2:00 p.m., Wednesday, March 9, 2022 at Clearview Baptist Church by Pastor Gary Greene, Pastor Zane Kramer and Pastor Jeff Worley with interment to follow in the church cemetery. The family will receive beginning an hour prior to the service at the church and other times at the residence. The family would like to give a special thanks to Amedisys Hospice for their exceptional care. The family suggests that those wishing to make memorials consider St. Jude Children's Research Hospital, 501 St. Jude Place, Memphis, TN 38105-9956 or the American Cancer Society, 2050 Langhorne Road, Suite 200, Lynchburg, VA 24501. Finch & Finch Funeral and Cremation Service, Altavista is in charge of arrangements.

The family of Judy Greene Steadman created this Life Tributes page to make it easy to share your memories.

Send flowers to the Steadman family.