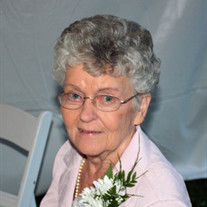 Kathleen Burnette "Kitty" Hunley of Altavista, passed away on Saturday, October 07, 2017, at Lynchburg General Hospital. She was a daughter of the late Barney L. and Nannie Maude Burnette and the widow of Ernest L. "Bud" Hunley to whom she was married for 64 years. Kitty was born on January 19, 1929, in Roanoke but spent most of her childhood on a dairy farm in Forest where she learned the value of hard work and the love of family. She graduated from New London Academy where she was a member of the women's basketball team. She was the secretary at Altavista High School for over 30 years. Kitty's two loves were her faith and her family. She accepted Christ as her Lord and Savior at a young age and boldly lived her faith for the rest of her life. She was a member of Central Baptist Church in Altavista serving there in many capacities, including choir member and Sunday School teacher. She loved to share her faith with people in all walks of life. For many years, she visited female inmates to tell them about the love of Jesus. Kitty created many memories for her family but none more special than those that occurred around her dining room table. Sunday lunch was a tradition in the close-knit, loving family Kitty grew up in, and she continued this tradition later in life with her children, grandchildren, and great grandchildren. In addition to those delicious lunches, the dining room table was also the location for many one-on-one conversations during which she shared motherly advice, offered Christian counsel, or simply listened. She had the wisdom to know the most effective approach in each situation. These dining room table talks had a great influence on her family. Due to the effects of Parkinson's Disease, Kitty became a resident at Autumn Care of Altavista in February 2013. She enthusiastically participated in the many activities there and the family thanks the volunteers who so willingly give their time to provide entertainment for the residents. The family also wishes to thank the nurses and CNAs who so lovingly cared for Kitty at Autumn Care and Lynchburg General Hospital. In addition to her parents and husband, Kitty was predeceased by a son, Gary Hunley; two brothers, Barney "Buck" Burnette and Jimmy Burnette; two sisters, Virginia Tolley and Lois Reynolds. She is survived by a son and daughter-in-law, Bob and Kristal Hunley; three grandchildren, Nikki Elder and husband, Mike, Ryan Hunley and wife, Apryl, and Tara Hunley; six great-grandchildren, Gavin, Briana, Amber, Cati, Lyrik, and Tyler; two sisters, Loraine Trent and husband, David, and Shirley Witt, and husband, Preston, and many nieces and nephews. Kitty adored her family and we adored her in return. Her sharp wit, strong convictions, and unconditional love will be greatly missed. The family will receive friends from 7 until 8:30 p.m. on Tuesday, October 10, 2017, at Finch and Finch, Altavista. A funeral service will be conducted at 11 a.m. on Wednesday, October 11, 2017, at Central Baptist Church, 515 7th Street, Altavista, by Rev. David Bayse, Pastor Nick Jones, and Ronnie Simpson with interment to follow in Green Hill Cemetery. In lieu of flowers, the family suggests memorial donations be made to Central Baptist Church, P.O. Box 387, Altavista, VA 24517. For God hath not given us the spirit of fear; but of power, and of love, and of a sound mind. 2 Timothy 1:7

Kathleen Burnette "Kitty" Hunley of Altavista, passed away on Saturday, October 07, 2017, at Lynchburg General Hospital. She was a daughter of the late Barney L. and Nannie Maude Burnette and the widow of Ernest L. "Bud" Hunley to whom she... View Obituary & Service Information

The family of Kathleen "Kitty" Burnette Hunley created this Life Tributes page to make it easy to share your memories.

Kathleen Burnette &quot;Kitty&quot; Hunley of Altavista, passed away on...

Send flowers to the Hunley family.