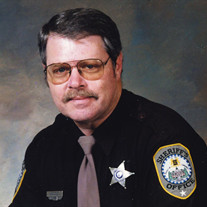 Kenneth Wayne "Buddy" Hudson, Jr. of Altavista, was called home to be with his Lord and Savior on September 12, 2019 after a courageous 21 year battle with cancer. Born December 22, 1955 in Alexandria, Buddy was an armed forces veteran having served in the Air Force and the U.S. Army National Guard, and a retired Campbell County Deputy Sheriff with 27 years of service. He enjoyed music and entertaining and was the lead singer of the popular club band Savannah Jack for 15 wonderful years and continued to run sound and sing for various local bands even after Savannah Jack ended. He was an avid boater and loved spending his weekends on Smith Mountain Lake with friends and family. He was preceded in death by his parents, Kenneth Wayne Hudson, Sr. and Ollie Lee Dalton Duke; step-mother, Brenda Barksdale Hudson; and a daughter-in-law, Carmen Rye Thomas whom he adored. He is survived by the love of his life and best friend, Juanita Hudson of the residence; three sons, Adam Richard Hudson of Altavista, David Michael Hudson and his fiancé, Maggie Greer of Lynch Station, and Brian Allen Thomas who he affectionately called "Holmes" of Moneta; three grandchildren, Nathan Hunter Hudson, Kenneth Blake Hudson and Conner Allen Thomas; one brother, Glenn Hudson of Altavista; one sister, Annette Holloway and her husband, Michael of Yorktown; special friends, Billy Worley and Robert and Wendy Lee; his beloved fur babies, Simon and Coco, and many other loving friends and family members. A memorial service will be conducted at 2:00 p.m., September 16, 2019 at Finch and Finch Chapel, Altavista by the Rev. Adam McDaniel with military honors by American Legion Altavista Memorial Post 36 and Gretna Post 232. The family will receive friends one hour prior to the service, beginning at 1:00 p.m., at the funeral home. The family would like to extend a heartfelt thank you to the staff at the Centra Alan B. Pearson Regional Cancer Center for the many years of love, care and compassion shown to Buddy. The family suggests that in lieu of flowers, please consider a memorial donation to the American Cancer Society, PO Box 22478, Oklahoma City, OK 73123 or the Leukemia and Lymphoma Society, Donor Services, PO Box 98018, Washington, D.C., 20090-8018.

Kenneth Wayne "Buddy" Hudson, Jr. of Altavista, was called home to be with his Lord and Savior on September 12, 2019 after a courageous 21 year battle with cancer. Born December 22, 1955 in Alexandria, Buddy was an armed forces veteran having... View Obituary & Service Information

The family of Kenneth Wayne Hudson Jr. created this Life Tributes page to make it easy to share your memories.

Send flowers to the Hudson family.