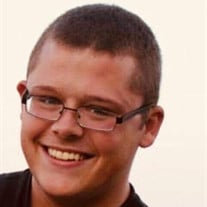 Kristopher Bryant Whorley, 25, of Lynch Station passed away Friday, September 28, 2018. He was born August 18, 1993 in Lynchburg, the beloved son of Terry Bryant Whorley and his wife, Teresa of Lynch Station and Carolyn Eades Fisher and her husband, Rick of Rustburg. Kristopher was a night manager at Foster Convenience Store. His hobbies included football, especially the Oregon Ducks and Washington Redskins, time on the lake with family and friends, and time at the drag strip. In addition to his parents, he is survived by his middle-school sweetheart of ten years, Amber Austin and her family which he shared a beloved relationship with Rhonda, Tyler, and Steve Austin; three sisters, Jessica Ashby (Brandon) of Rustburg, Remington Whorley of Evington, and Heather Whorley of Lynch Station; a step brother, Josh Booher (Tara) of Huddleston; paternal grandmother, Shelby Jean Brooks (Harold) of Forest; a niece, Alivia Ashby; a nephew, Caleb Ashby; cousins, Corey and Coleman Ramsey; and special friends, Michael Epperson and Mickey Epperson. A funeral service will be conducted at 2:00 p.m., Wednesday, October 3, 2018 at Finch and Finch Chapel, Altavista with interment to follow in the Whorley Family Cemetery, Huddleston. The family will receive friends from 6:00 until 8:00 p.m., Tuesday at Finch and Finch Funeral and Cremation Service, Altavista and other times at the residence of his sister, Jessica Ashby, 170 Barringer Dr., Rustburg.

The family of Kristopher Whorley created this Life Tributes page to make it easy to share your memories.

Send flowers to the Whorley family.