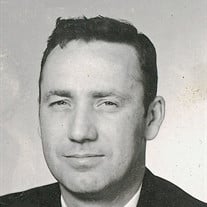 Larry Raymond Jewell, DDS of Altavista, passed away on July 11, 2018 at Lynchburg General Hospital after several years of deteriorating health. He is survived by his wife, Lucinda Fayrene of the home, a daughter Michele "Micki" Kathleen Brumfield (Chris) of Altavista, a son, Charles Scott Jewell (Monica) of Burlington, NC, and a granddaughter, Alexandra "Andra" June (Daniel) Nassif of Roanoke. Dr. Jewell was born in Neodesha, KS to Charles Raymond and Ruth Bressie Jewell on March 16, 1937. Upon graduating from high school he entered the US Navy as a dental technician. He graduated from Washington University School of Dentistry in St. Louis, MO in 1966 and rejoined the Navy as a 2nd Lieutenant. He practiced dentistry for 50 years at the Norfolk Naval Shipyard, Virginia Beach and Altavista until his retirement in 2016. He served the Altavista and surrounding community in many capacities as President of the Exchange Club, President of the Chamber of Commerce, Boy Scouts of America and Altavista Town Council. He also served on the Board of the Piedmont Council, the Board of Central Virginia Community College; he volunteered to teach dental students at the free dental clinic in Lynchburg and volunteered his dental services to the residents of Autumn Care in Altavista. He was a member of the Church of the Epiphany in Amherst from 1983 until his passing. He volunteered and served as usher and vestry member for many years. A graveside service will be held at Green Hill Cemetery, Altavista on Saturday, July 14, 2018 at 10:00 a.m. with military honors by American Legion Post 16. Following the service at 11:00 a.m., a memorial service will be held at Finch and Finch Chapel. A reception will immediately follow the second service at the Altavista Area YMCA. All family and friends are invited to attend all services and the reception. The family suggests that those wishing to make memorials consider St. Jude Children's Research Hospital, 501 St. Jude Place, Memphis, TN 38105 or Shriner's Hospital for Children, 2900 Rocky Point Drive, Tampa, FL 33607.

Larry Raymond Jewell, DDS of Altavista, passed away on July 11, 2018 at Lynchburg General Hospital after several years of deteriorating health. He is survived by his wife, Lucinda Fayrene of the home, a daughter Michele "Micki" Kathleen Brumfield... View Obituary & Service Information

The family of Dr. Larry Raymond Jewell DDS created this Life Tributes page to make it easy to share your memories.

Larry Raymond Jewell, DDS of Altavista, passed away on July 11,...

Send flowers to the Jewell family.