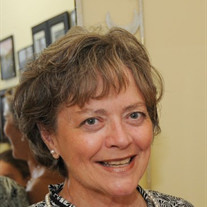 Linda Johnson Williams, 75, of 103 Saint David Drive, Lynchburg died Saturday, May 24, 2020. She was born July 29, 1944 in Lynchburg, a daughter of the late Charlie Edward Johnson and Bernice Lee Creasy Johnson. She was a member of Grace... View Obituary & Service Information

The family of Linda J. Williams created this Life Tributes page to make it easy to share your memories.

Send flowers to the Williams family.