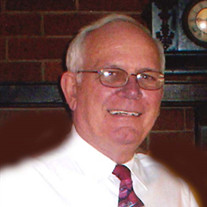 Lowell Lorenza "Chink" Thomas, Sr., 84, of Altavista, died Monday, August 24, 2020 at his home. He was the husband of Arlene Edmonds Thomas. He was born May 10, 1936 in Altavista, a son of the late Edgar B. Thomas and Nell Jones Thomas. He was a member of St. Victoria's Catholic Church and a retired car salesman. Chink began his career in car sales at an early age of 17, he worked at Highview Motors and Fellers Chevrolet. He was also part owner of Arlene's Florist, Inc. He was known for his loyal, dedicated service to the auto industry and his customers. He was also a member of General Motors Legend of Leaders. Whether you knew him for a moment or a lifetime, it was inescapable, that Chink's life was filled with respect, faith, laughter, a unique personality and love. Chink had a smile that was contagious to everyone he met. He was kindhearted, generous and maintained friendships with people of all ages, races and walks of life. He was past president of Jaycees, Altavista Chamber of Commerce and Exchange Club and the Grand Marshall of the Altavista Christmas Parade. Chink loved to sing and was blessed with a beautiful bass voice that often was requested at weddings and funerals. In addition to his wife, he is survived by two sons, Chris Thomas and his wife, Missy of Woden, TX and Michael Thomas and his wife, Courtney of Houston, TX; one daughter, Cynthia T. Pickering and her husband, Art of Florida; one brother, E.B. Thomas of South Carolina; seven grandchildren, Kevin, Eric, Colby, Justin, Ryan, Shandi and Blake; and four great grandchildren, Brian, Benjamin, William and Noah. He was preceded in death by a son, Lowell Lorenza "Chip" Thomas, Jr.; one brother, Clement Irwin Thomas; two sisters, Rachel T. Keatts and Montaree T. Blair; and a special cousin, Deborah J. Mason. A funeral mass will be conducted at 11:00 a.m., Thursday, August 27, 2020 at St. Victoria's Catholic Church by Father Jim Gallagher with interment to follow in Green Hill Cemetery. The family will receive friends from 7:00 until 8:30 p.m., Wednesday at Finch and Finch Funeral and Cremation Service, Altavista. The family suggests that those wishing to make memorials consider St. Victoria's Catholic Church, P.O. Box 640, Hurt, VA 24563 or Friends of Campbell County Animal Control, 1400 Edley Place, Lynchburg, VA 24502.

Lowell Lorenza "Chink" Thomas, Sr., 84, of Altavista, died Monday, August 24, 2020 at his home. He was the husband of Arlene Edmonds Thomas. He was born May 10, 1936 in Altavista, a son of the late Edgar B. Thomas and Nell Jones Thomas. He... View Obituary & Service Information

The family of Lowell Lorenza Thomas Sr. created this Life Tributes page to make it easy to share your memories.

Send flowers to the Thomas family.