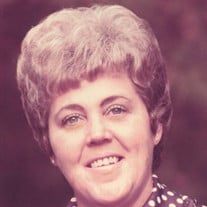 Margaret Sandidge Hunley, 87, of Altavista died Monday, September 21, 2020 at Centra Lynchburg General Hospital. She was the wife of the late Bruce Layfette Hunley for sixty-six years. She was born June 25, 1933 in Pittsylvania County, a daughter of the late Graham Myers Sandidge and Mary McCrickard Sandidge and a member of Altavista Church of Christ. She is survived by a son, Phillip Hunley and his wife, GiGi of Altavista; a daughter, Cindy Pugh and her husband, Les of Altavista; one brother, Bobby Sandidge and his wife, Carolyn of Williamsburg; one sister, Linda Scott of Lynchburg; three grandchildren, Kristin Smawley, Justin Pugh, and Kendall Hunley and his wife, Amy; five great grandchildren, Casey Rowan, Reagan Hunley, Addison Smawley, Lincoln Hunley, and Gunnar Smawley. She was preceded in death by one brother, James Sandidge; and one sister, Dorothy Hall. A funeral service will be conducted at 2:00 p.m., Wednesday, September 23, 2020 at Finch and Finch Chapel by Lory Brafford, Minister with interment to follow in Green Hill Cemetery. The family will receive friends beginning one hour prior to the service at the funeral home. Due to the COVID-19 pandemic the family will not be receiving friends at their homes, however, Mrs. Hunley will be available for viewing from 3:00 until 9:00 p.m. Tuesday at the funeral home. The family suggests that those wishing to make memorials consider, St. Jude Children's Research Hospital, 501 St. Jude Place, Memphis, TN 38105-9956.

Margaret Sandidge Hunley, 87, of Altavista died Monday, September 21, 2020 at Centra Lynchburg General Hospital. She was the wife of the late Bruce Layfette Hunley for sixty-six years. She was born June 25, 1933 in Pittsylvania County, a... View Obituary & Service Information

The family of Margaret Sandidge Hunley created this Life Tributes page to make it easy to share your memories.

Send flowers to the Hunley family.