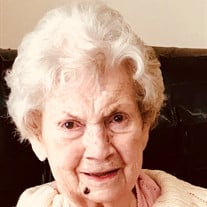 LYNCHBURG, VA - Margaret Lenore Brewer Shelton, 96, died on September 30, 2018, in Lynchburg, Virginia. A resident of Portsmouth, Virginia until mid-2014, Margaret was the wife of the late Linwood Carl "L. C." Shelton Jr. for nearly 70 years. Margaret, affectionately called "Peg," was born in Portsmouth in 1922 to Ethel Louise Myers Brewer and Willet Reid Brewer. After graduating from Wilson High School, she continued her education at Randolph-Macon Woman's College in Lynchburg, where she became a member of Kappa Delta sorority in 1940, graduating in 1943 with a B.A. in Latin. While there, Margaret dated L.C., then a VPI cadet, who hitchhiked to and from Lynchburg to see her. Following his February 1943 graduation, L.C. attended Officer Candidate School, returning in August just before his wedding to Margaret. Prior to L.C.'s 1945 deployment to the Pacific Theater, he and Peg lived in places as diverse as Ludowici, GA, Blue Ridge Summit, PA, Dothan, AL, Camp Gruber, OK, and Paris, TX, and had various adventures, including a memorable one in Ludowici where the prim and proper Margaret singed her eyebrows and hair while trying to light a kerosene stove. In 1946 Margaret and L.C. returned to Portsmouth, where he joined the family grocery business in Port Norfolk. In these early years, Margaret worked as a secretary for a Portsmouth attorney. Although her skills eventually improved, she told of making so many typing mistakes that she began hiding mistyped pages in her purse. L.C. and Margaret first lived in the Waterview Apartments, later moving to Margaret's childhood home in West Park View. In 1959, they built a home in Sterling Point, next door to their lifelong friends Peggy Lou and Dave Spence, and not far from dear friend Eveleen Rolfe. Creating and maintaining her new home engaged Margaret's time and talents, resulting in a gracious home which the family enjoyed for many years. Margaret was an avid reader and loved to travel. In 1966 she planned a family cross-country road trip, which she researched down to the last detail and which is still fondly remembered by her children. Later Margaret and L.C. traveled to England, most notably during the Queen's Jubilee in 1977, and to other countries in Europe. Their last trips were to California, where Margaret fell in love with Carmel and Santa Barbara, and to Arlington and Altavista to see their children and grandchildren. As was her meticulous nature, Margaret kept a notebook in which she inscribed many household and family details in her beautiful handwriting, including a page for each grandchild, on which she noted favorite foods, snacks, and activities. Although Alzheimer's disease made later life difficult for her and for those who loved her, Margaret's essential character was that of a thoughtful and generous person who dearly loved her family. Margaret is survived by her children, L. Scott Shelton of Arlington; Phyllis Shelton Higginbotham, and her husband James Hunter Higginbotham II (Jay) of Altavista; and grandchildren James Hunter Higginbotham III and his wife Charity, Margaret Higginbotham Flaherty and her husband Bryan, Edwin Massie Higginbotham and his fiancée Elizabeth Stahl, and Sumner Shelton Higginbotham. In addition, Margaret is survived by her sister-in-law Peggy Shelton Fore, and nieces Judy Van Dyck Walter and Susan Gaskin Haden. In addition to her husband and parents, she was predeceased by her beloved younger sister Phyllis Louise Brewer Gaskin and her brother-in-law John J. Gaskin, her nephew Paul Stephen Gaskin, her sister- and brother-in-law Evelyn Shelton Van Dyck and James B. Van Dyck, her brother-in-law Dr. Harry W. Fore Jr., and her niece Donna Van Dyck Moseley. The family extends deepest appreciation to Margaret's former caregivers in Portsmouth, Nancy Hales, Diana Clay, Rebecca Spruill, Genell Ambrose, and Sherry Norton, who treated "Miss Margaret" with unfailing patience and kindness. The family also thanks Tony Macklin for his years of cheerful dedication. The family also remembers with love and appreciation the many years of devoted service and friendship by the late Margaret Turner. Finally, the family expresses its sincere gratitude to the wonderful staff at Runk and Pratt Memory Care of Forest for the excellent care and compassion shown to Margaret during her last years. Every effort was expended to assure her comfort and peace of mind. A graveside memorial service will be held at 3:00 pm on Saturday, October 20th, at the Shelton/Brewer plot near the Portlock Gate in Oak Grove Cemetery (off Peninsula Drive, Portsmouth, VA 23704), where Margaret will be laid to rest with her devoted L.C., her parents and maternal grandparents, and her younger sister Phyllis. The service will be conducted by Reverend John W. Cole II, pastor of Centenary United Methodist Church. The family will host a reception following the service. Finch and Finch Funeral Home is assisting the family in Altavista, and Loving Funeral Home (3225 Academy Avenue, Portsmouth 23704) is handing Portsmouth arrangements. Those wishing to make memorial donations, please consider the Altavista Area YMCA (P.O. Box 149, Altavista, VA 24517) where the grandchildren participated in many sports and community programs through the years, or Centenary United Methodist Church (3312 Cedar Lane, Portsmouth, VA 23703), Margaret's home church. .

The family of Margaret Brewer Shelton created this Life Tributes page to make it easy to share your memories.

Send flowers to the Shelton family.