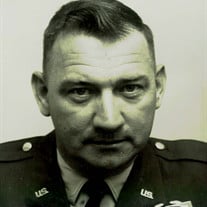 Marvin Abshire "M.A." Farmer, Jr., 90, of 1611 Avondale Drive, Altavista died Monday, September 14, 2020 at Centra Lynchburg General Hospital. He was the husband of Velma Janice Lea Farmer for sixty-nine years. He was born April 16, 1930 in Lynchburg, a son of the late Marvin A. Farmer, Sr. and Louise Phillips Farmer. He was a member of Franconia Baptist Church in Alexandria, the D.A.V., the Vietnam Helicopter Association, the Purple Heart Association, and a former member of V.F.W. #4155. M.A. entered the U.S. Army at the age of seventeen rising to the rank of Master Sergeant at the age of twenty-one. He served in the Korean Conflict from 1951-1952 while receiving the Purple Heart December 1, 1951. He became an Army Aviator in 1956 and served in Germany from 1958-1961, then serving two tours in the Vietnam War as a helicopter pilot in 1961-1962 and a fixed wing pilot from 1968-1969. After a distinguished career, which spanned twenty-seven years and a recipient of the Bronze Star, he retired in 1974. After his retirement from the military, he moved to Altavista and worked as a Trust Officer Auditor and Branch Manager for First National Bank. Later, he was the co-owner of Staunton River Hardware from 1978-1981. In addition to his wife, he is survived by two sons, David Wayne Farmer and his wife, Karen of Warrenton and Thomas Marvin Farmer of Hurt; two special children, foster son, Derek Catron and foster daughter, Samantha Catron Owen; a sister, Sandra Farmer Maschal; two grandsons, Dustin David Farmer and Derek Ryan Farmer; and many nieces and nephews. He was preceded in death by two brothers, William "Billy" Hoskins Farmer and James Walter Farmer. A funeral service will be conducted at 1:00 p.m., Friday, September 18, 2020 at Finch and Finch Chapel, Altavista by Pastor Matt Gaston. Entombment will follow in Altavista Memorial Park with military honors. The family will receive friends one hour prior to the service from noon until 12:45 p.m., at the funeral home and other times at the residence. The family suggests that those wishing to make memorials consider the Wounded Warriors Project, PO Box 758516, Topeka, KS 6675-8516. Finch and Finch Funeral and Cremation Service, Altavista is in charge of arrangements.

The family of Marvin Abshire "M.A." Farmer Jr. created this Life Tributes page to make it easy to share your memories.

Send flowers to the Farmer family.