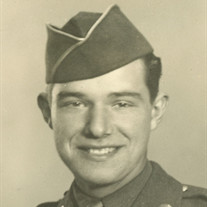 Marvin Daniel Myers, 93, of Hurt, passed away Thursday, September 13th, 2018 at Autumn Care of Altavista. Mr. Myers was born April 10th, 1925 in Altavista to John Daniel and Grace Jenks Myers. He was drafted out of high school to fight in World War II. He served his country as a soldier in the U.S. Army fighting in the jungles of New Guinea. After honorable discharge from the Army, he found a job at Burlington Industries weaving plant where he met his wife of 68 years, Druesy Bell Adams (Myers). He worked at The Lane Company in Altavista for several years making cedar chests and later at Burlington Industries Transportation Division for 29 years until his retirement in 1990. He was a member of Motley Baptist Church in Hurt where he served as a deacon. He loved his family and during his retirement years he loved working in his shop building bird houses and tinkering on old lawn mowers. In addition to his parents, Marvin was preceded in death by two brothers and two sisters. He is survived by his wife Druesy Bell Adams Myers of the home; two sons, Danny Myers and his wife, Janet of Asheboro, NC and Kenneth Myers and his wife, Kathy of Harrisburg, PA; two brothers, Carey T. Myers and his wife, Dorothy of Williamsburg and H. Landon Myers and his wife, Becky of High Point, NC; two grandsons, Daniel C. Myers of Winston Salem, NC and Jeremy D. Myers of Asheboro, NC; and multiple nieces and nephews. A graveside service will be conducted at 2:00 p.m., Tuesday, September 18th, 2018 at Altavista Memorial Park, Altavista by the Rev. Mitchell Etheridge of Motley Baptist Church with military honors by American Legion Altavista Memorial Post 36 and Gretna Post 232. The family will receive friends from 6:00 until 7:30 p.m., Monday at Finch and Finch Funeral and Cremation Service, Altavista and other times at the residence. The family would like to thank the staff at Autumn Care of Altavista and Gentle Shepherd Hospice for their care and kindness. The family suggests that those wishing to make memorials consider Motley Baptist Church, 152 Perdue Dr., Hurt, VA 24563 or a charity of the donor's choice.

Marvin Daniel Myers, 93, of Hurt, passed away Thursday, September 13th, 2018 at Autumn Care of Altavista. Mr. Myers was born April 10th, 1925 in Altavista to John Daniel and Grace Jenks Myers. He was drafted out of high school to fight in... View Obituary & Service Information

The family of Marvin Daniel Myers created this Life Tributes page to make it easy to share your memories.

Send flowers to the Myers family.