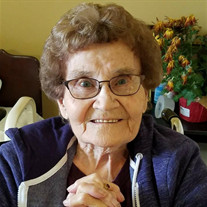 Mary Smith Brown, 92, of Altavista, died February 14th, 2018 at Guggenheimer Nursing Home, surrounded by her family. She was born in Gretna, August 12, 1925, to the late Will Smith and Lena Smith of Gretna. She was predeceased in death by her husband of 40 years Garland Tewell Brown, sisters, Ethel Clark, Nannie Ingram and brother, Gilbert Smith. She is survived by her three sons that have been by her side since Garland died in 1982, Jerry Kent Brown and his wife, Darnella, Garland Dean Brown and his wife, Laura and Leonard Ray Brown and his wife, Donna; six grandchildren, Troy Brown, Dena Parzygnot, Derek Brown, Jennifer Edwards, Stacy Wade, and Terry Brown; ten great-grandchildren and special friends, Lewis Floyd and Mary Bradner. Mary worked at Burlington Industries for 40 years, after retiring she realized retirement was not for her. She started her new career at the Wal-Mart in Altavista, as a Greeter for 10 years. Garland and Mary enjoyed their trips to Myrtle Beach camping with their boys, family and friends. When her boys were growing up the house was always full of their friends and she loved to cook. When the boys were living elsewhere they returned home on Saturday morning for breakfast with friends and co-workers. She loved her family and friends so much; her favorite saying was "Where are you going, you don't have anything else to do, stay awhile". She was a lifetime member of the Altavista Church of Christ. A funeral service will be conducted at 11:00 a.m., Saturday February 17th, 2018 at the Altavista Church of Christ, Altavista, by Lory Brafford, Minister and Larry Evans, Minister followed by burial at Altavista Memorial Park. The family will receive friends from 6:30 p.m. until 8:00 p.m. Friday at Finch and Finch Funeral and Cremation Service, Altavista. In lieu of flowers, donations can be made to the Altavista Church of Christ, 1301 Avondale Dr., Altavista, VA 24517 or a charity of your choice. The family would like to thank Guggenheimer Nursing Home, Centra Hospice, and Lynchburg General Hospital for their support and loving care.

Mary Smith Brown, 92, of Altavista, died February 14th, 2018 at Guggenheimer Nursing Home, surrounded by her family. She was born in Gretna, August 12, 1925, to the late Will Smith and Lena Smith of Gretna. She was predeceased in death by... View Obituary & Service Information

The family of Mary Smith Brown created this Life Tributes page to make it easy to share your memories.

Send flowers to the Brown family.