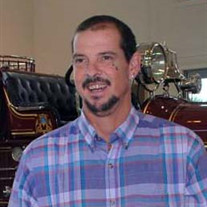 Michael Lee Crews, 50, of Hurt died Tuesday, December 8, 2020 at Centra Lynchburg General Hospital. He was born March 18, 1970 in Lynchburg, a son of Victor Lee Crews and his wife, Debbie and the late Dianne Arthur Crews Jackson. He attended Edge Hill Baptist Church. Michael had a love for life, fun, and humor. His smile and laugh were one of a kind. He loved to drive in the country, listen to music, and spend time with family and friends. In addition to his father and step-mother, he is survived by a very important person, Ethan Young of Lynchburg; one brother, Joshua Crews and his wife, Sara of Altavista; two sisters, Alyssa Crews Kurtz and her husband, Kelly of Concord and Nikki Crews Catron and her husband, Shain of Long Island; nieces and nephews, Katie and Kyle Kurtz, Jazmin and Noah Catron, and Kaylee, Alayna and Brayden Crews; aunts and uncles, Mary Ann Lanier, Billy Arthur, Leonard and Mary Jessie Shelton all of Hurt; and a host of cousins. In addition to his mother, he was preceded in death by his maternal grandparents, Clyde and Doris Arthur; and paternal grandparents, Jessie and Mary Crews. A private memorial service will be conducted and live streamed. The family suggests that those wishing to make memorials consider Roads to Recovery, 3000 Langhorne Road, Lynchburg, VA 24501, The Free Clinic of Central Virginia, 1016 Main Street, Lynchburg, VA 24504, American Diabetes Association, 4335 Cox Rd., Glen Allen, VA 23060 or local Gretna, Hurt, Pittsylvania County EMS. Finch and Finch Funeral and Cremation Service, Altavista is in charge of arrangements.

The family of Michael Lee Crews created this Life Tributes page to make it easy to share your memories.

Send flowers to the Crews family.