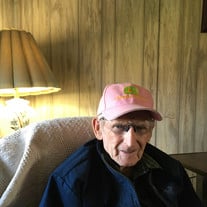 Ollie Dotson Vaughan, 88, joyfully placed his hand in that of his Lord and Savior, Jesus Christ, on Friday, January 22, 2021 while under the care of hospice, his beloved wife, Katie L. Vaughan, her cousin Frank Morano and sister, Millie at their home in Hurt. Born February 27, 1932 in Hurt, he was the son the late Raleigh Edward and Virginia Dawson Vaughan and nephew of his cherished Uncle Luther and Aunt Lizzie Dawson. He was member of Edge Hill Baptist Church. A man of many trades, he knew no stranger and would be the "go to person" if one was in need - from local farmers for liming, state and local police for towing, neighbors needing new tires or tractor repairs, and groceries for the family. His "Ollie Vaughan Store" in Hurt was known as the "Hub" back in the day. After a hard day's work, locals would gather outside the store for chat and refreshments until closing time. In addition to his wife, he is survived by his daughter, Peggy Saunders and her husband, Dale, of Altavista; step-daughter, Diane Davis and her husband, Billy, of Hurt; two brothers, James Vaughan of Hurt and Jessie Vaughan of Petersburg; two sisters, Lillie Mae Nichols of Altavista and Mary Nichols of South Carolina; four grandsons, Kelly Hancock, wife, Jeanette, and son Zach of Hurt, Eddie Hancock and wife, Cindi, of Lynch Station, Chris Davis of Hurt, and Deputy Sheriff Jason Saunders of Altavista (deceased); two brothers-in-law, Tony Martin of WV and Mark Ardeeser and wife, Kim, of PA; two sisters-in-law, Fran Auld and Millie Watson of WV; all of their families; and numerous nieces and nephews. "Poppa" had a very special bond with Jason and also with Kelly and Eddie, whom he and his wife, Emmet ("Grannie"), helped raise and he often called them "his kids." Ollie was preceded in death by his first wife, Vernelle Dinkle Vaughan, and second, Emmet Compton Vaughan; and grandson, Deputy Sheriff Jason Saunders. He is also survived by loving and trusting friends, Gloria, Amelia, Teresa, Antoinette, Joyce, Robert and Gordon, Hugh, Doug, The Waller Family, Jeff, Lori, Kathy, Jim, and in spirit, his dear friend, Moses - and many more then space will allow. A heartfelt thank you to all those who helped us during this journey especially, Centra Hospice and Project Lifesaver. You know who you are! A graveside service will be held at 4:00 p.m., Sunday, January 24, 2021 at the "Family Cemetery" across from the store. In lieu of flowers, his family asks for donations to be made in Ollie's name to either Centra Hospice, 2097 Langhorne Rd., Lynchburg VA 24501, or Altavista Police Dept., in honor of his grandson, Deputy Sheriff Jason Saunders, 510 7th St., Altavista VA 24517. Arrangements by Finch and Finch Funeral and Cremation Service, Altavista.

Ollie Dotson Vaughan, 88, joyfully placed his hand in that of his Lord and Savior, Jesus Christ, on Friday, January 22, 2021 while under the care of hospice, his beloved wife, Katie L. Vaughan, her cousin Frank Morano and sister, Millie at their... View Obituary & Service Information

The family of Ollie Dotson Vaughan created this Life Tributes page to make it easy to share your memories.

Ollie Dotson Vaughan, 88, joyfully placed his hand in that of...

Send flowers to the Vaughan family.