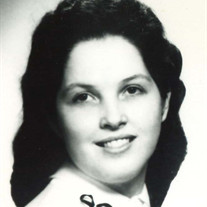 "Precious in the sight of the Lord is the death of His saints." - Psalm 116:15 Ora Florence Irby Blanks went to be with the Lord, Friday, August 21, 2020, after a prolonged battle with Alzheimer's Disease. She was born August 11, 1936 in Hurt, Virginia to William Nathaniel Irby and Mary Doss Irby. Ora was one of twelve children and the last of her generation. Her death is the end of an era for the Irby family, who will sorely miss her. On October 5, 1963 she married A.V. Blanks. He was handpicked by God. Ora was bubbly and effervescent. People were drawn to her lively personality. She easily engaged in conversation and had a wide circle of friends. She was bright, inquisitive and wanted to travel during her summer breaks from teaching school. A.V. was quiet and content to stay at home. He desired her happiness and encouraged her to travel, while he tended the farm. Their differences complimented one another. A.V.'s generosity enabled her to travel all over the world, visiting Africa, Australia, New Zealand, England, Ireland, Israel, Spain and many other countries. She maintained worldwide friendships through letter writing. Ora was a wordsmith and loved to write long, descriptive letters. She was also known for short notes of appreciation or encouragement. Regardless of the length, her correspondence was flawlessly worded and cherished by the recipient. She often typed on an old ribbon typewriter, but her beautiful penmanship was a joy to behold. Ora had a lifelong love for learning. Growing up on the farm on Pocket Road, she'd take a book with her to weed the garden. She excelled in school and was valedictorian of her graduating class. She went on to earn degrees from Holmes College of the Bible in Greenville, South Carolina and Averett University, in Danville. Her dearest book was the Bible. She called it "The Book of Books". Ora was saved at the age of twelve and lived a vibrant, consecrated life for the Lord. She was a natural educator, teaching English Literature at Altavista High School and was a matchless Sunday School teacher at Hurt Pentecostal Holiness Church. She was always immaculately prepared to teach. She lived her life in the nailprint of Jesus' hand, wanting His will above all else and for Him to be glorified in whatever she did. Her prayer life was unparalleled. She was filled with the Holy Spirit and possessed "Mountain-moving Faith". She is reaping the rewards for her far-reaching influence and witness. She was faithful to serve her church, as long as her health permitted. In addition to teaching, she sang in the choir and supported missions, including building the A.V. Blanks Memorial Church in Africa, which she and Sheila traveled to Zimbabwe, to dedicate in 1996. Her beloved A.V. predeceased her July 28, 1994. She and A.V. had no children, but took special interest in their niece, Sheila, and loved her as their own daughter. She loved all of her nieces and nephews, many of whom called her "Honey", which she loved, but Sheila was special. Ora is survived by her niece and caregiver, Sheila Hardy Moon and her husband, Charles Keith Moon, Sr. and their children, Jenny Lind Moon and Charles Keith Moon, Jr. She is also survived by Jenny's daughters, Breighanna Lind and Kailee Nicole. She touched the lives of countless people, with her ability to connect with people and her gift of Love. She is further survived by a multitude of friends, nieces and nephews, in both the Irby and Blanks families. The family is grateful to the staff of Liberty Ridge Assisted Living, in Lynchburg and Seven Hills Hospice Care, as well as her former caregivers, Brenda Pickeral, Alice Mattox and Louise Towler. She was predeceased by her sisters, Nola I. Scearce, Effie I. Hardy, Esther I. Pearson and Bettie I. Leffel "Teen" and her brothers; Dallas, Carlton, Sterlin, Charlie and Maynard; and two infant brothers, Reevie and Marie. In lieu of flowers, please consider the Alzheimer's Association, 355 Rio Road West, Suite 102, Central and Western Virginia Chapter, Charlottesville, VA 22901 or Hurt Pentecostal Holiness Church, 1212 Grit Road, Hurt, VA 24563. Ora would like her lasting memorial to be prayer for the Lost. A memorial service will be conducted at 2:00 p.m., Saturday, October 3, 2020 at Hurt Pentecostal Holiness Church. The family will receive friends beginning at 12:30 p.m. Finch and Finch Funeral and Cremation Service, Altavista is in charge of arrangements.

"Precious in the sight of the Lord is the death of His saints." - Psalm 116:15 Ora Florence Irby Blanks went to be with the Lord, Friday, August 21, 2020, after a prolonged battle with Alzheimer's Disease. She was born August 11, 1936 in... View Obituary & Service Information

The family of Ora Irby Blanks created this Life Tributes page to make it easy to share your memories.

&quot;Precious in the sight of the Lord is the death of His saints.&quot;...

Send flowers to the Blanks family.