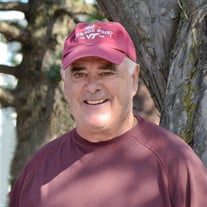 With his family by his side, Patrick William "Pat" deBernard, 74, passed away peacefully on Thursday, March 25, 2021 at his Rustburg home following a short illness. Pat was the loving husband of Carolyn Marshall deBernard for 53 years. He was born December 2, 1946 in Campbell County, Virginia the only son of the late Jean William deBernard and Maebelle Krantz deBernard. After graduating from Altavista High School, Pat proudly served in the US Army including combat duty during the Vietnam War. Pat was the "semi-retired' owner of Yeatts Transfer Company and 3D Delivery in Altavista. Anyone who knew Pat would roll their eyes at his claim of being "semi-retired". His work ethic was legendary. If you were never fed by Pat, you likely never met him…because he fed everybody! - family, countless friends, neighbors, employees, business partners, townsfolk, tailgaters, students, teachers, coaches, first responders, church congregations, veterans and revelers and celebrants for all occasions. He was his happiest when perched upon his famed mobile kitchen, apron around his waist with the cookers fired up and loaded with his renowned grilled meats and delectable side dishes. No one ever went hungry around Pat. Pat lived a life of serving and helping others. He was particularly devoted to his adopted hometown of Altavista. He chaired the Uncle Billy's Day Festival committee for more than a decade. His tireless efforts and meticulous attention to detail always ensured an overwhelmingly successful event that brought significant recognition and much needed economic vitality to the town. For his longtime service, Pat was named the Altavista Citizen of the year in 2004. Always humble by nature, Pat was never one to seek attention for himself. He quietly helped community organizations raise funds and was always quick to extend a helping hand to anyone who needed a job, a meal, winter coat or just an encouraging word. He is perhaps most well-known across the region for his spectacular summer fireworks show that annually lit up the Yellow Branch skies to celebrate our nation's independence. An accomplished professional pyrotechnic, Pat proudly hosted arguably America's largest backyard fireworks extravaganza. It was indeed something to witness. Each year the show was bigger and more incredible. Tens of thousands of spectators were always awestruck by his amazing and astonishing display. Along with his parents, he was preceded in death by two sisters, Theresa Reynolds and Lebrianne Guthrie. In addition to his wife, he is survived by two sons, Kevin deBernard (Kelly) of Altavista and Kris deBernard (Andrea) of Springfield; one sister, Lucy Marshall of Rustburg; and three grandchildren, Keegan, Kiernan, and Ally. He will also be sadly missed by his many nieces and nephews, innumerable friends, his Colonial breakfast buddies, co-workers, business associates, his beloved Hokie Tailgater family and so many more people he touched during in his lifetime. A memorial service and Celebration of Life will be conducted at 2:00PM on Saturday April 3, 2021 at the Altavista Fire Company located at 1280 Main Street. The family will receive friends immediately following the service at the Altavista Fire Company and other times at the residence. For those wishing to make memorial gifts, the family suggests to please consider the Leukemia and Lymphoma Society at donate.lls.org.

With his family by his side, Patrick William "Pat" deBernard, 74, passed away peacefully on Thursday, March 25, 2021 at his Rustburg home following a short illness. Pat was the loving husband of Carolyn Marshall deBernard for 53 years. He... View Obituary & Service Information

The family of Patrick William deBernard created this Life Tributes page to make it easy to share your memories.

With his family by his side, Patrick William &quot;Pat&quot; deBernard,...

Send flowers to the deBernard family.