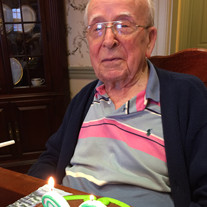 Paul Edmond Cocke, 98, died Friday, June 21, 2019 at The Summit in Lynchburg. He was born January 24, 1921 in Pittsylvania County, a son of the late Thomas Grayson Cocke and Grace Shelton Cocke. He was the husband of the late Doris Lanier Cocke for 67 years. Paul was the last survivor of his immediate family. Preceding in death were brothers, Harry, Carroll, Henry, Marshall, Claude, and Moses; and sisters, Alice C. Pickeral, Ruth Cocke, and Ethel C. Welborn. He is survived by many loving nieces, nephews, and brothers and sisters-in-law. Mr. Cocke was a WWII veteran where he served in the 3rd Army of the European Theatre, which included the Battle of the Bulge and later sent to the Pacific on Okinawa while getting ready for the invasion of Japan. He spent 69 days on a ship from Marseille, France to Okinawa. He received the "Thank You America" certificate in appreciation for the Liberation of France at a special ceremony by a member of the Consulaire De France. Upon return to civilian life, Mr. Cocke had a long career with Burlington Industries in Altavista. After he retired, he and Doris enjoyed traveling and especially cruising. Also, of great joy was his YMCA membership where the camaraderie, trips, and activities became an important part of his life. He was an avid fan of professional baseball, rooting for the Atlanta Braves and later on, the New York Yankees. Paul was a long and faithful member of New Bethel United Methodist Church and Payneton United Methodist Church, a fifty year plus member of the Masonic Lodge, and a member of the V.F.W. and the American Legion. A funeral service will be conducted at 11:00 a.m., Tuesday, June 25, 2019 at New Bethel United Methodist Church by the Rev. Steve Morris and Rev. Harold Thornton. Interment will follow in the church cemetery with military honors by American Legion Altavista Memorial Post 36 and Gretna Post 232. The family will receive friends prior to the service beginning at 10:00 a.m. The family extends a special thanks to the staff of The Summit Health and Rehabilitation Center. In lieu of flowers, the family suggests memorials be made to Wounded Warrior Project, PO Box 758516, Topeka, KS 66675-8516 or Folds of Honor Foundation, Department 13, Tulsa, OK 74182.

Paul Edmond Cocke, 98, died Friday, June 21, 2019 at The Summit in Lynchburg. He was born January 24, 1921 in Pittsylvania County, a son of the late Thomas Grayson Cocke and Grace Shelton Cocke. He was the husband of the late Doris Lanier... View Obituary & Service Information

The family of Paul Edmond Cocke created this Life Tributes page to make it easy to share your memories.

Send flowers to the Cocke family.