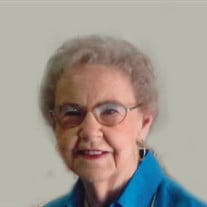 Peggy Lee Hubbard Rogers, of Lynchburg died, Monday, April 22, 2019 at Centra Lynchburg General Hospital. She was born November 1, 1923 in Halifax County, the youngest child of Samuel and Josephine Hubbard. She was married to Dr. Ned C. Rogers for 48 years. She graduated from Volens High School and Richmond Business College. After college and a civil service exam, she was appointed to the job of Secretary to the Post Engineer of Camp Pickett, VA. There she met Lieutenant Rogers and they were married and moved to Camp Breckinridge, KY and later to the Port of Embarkation in New York where she worked as a secretary while her husband served overseas. After the war, they lived in Missouri for 5 years while Dr. Rogers completed his medical education and they moved to Pineville, WV where he practiced for 33 years and their 3 children grew up. As a homemaker she enjoyed church and club work, gardening and bridge. Retirement in 1983 brought the couple back to Virginia and Dr. Rogers died there in 1992. Mrs. Rogers moved to Lexington, KY to be near her only daughter, Jane Susan Miser and her family. After Jane's death in 2007, she came to Lynchburg, VA to live at Valley View Retirement Community until her death. She is survived by her son, David J. Rogers (Lisa) of Elon, NC and their children Kevin and Lori (Chad); her son-in-law Bob Miser (Kathy) of Lexington, KY and his and Jane's daughter Robin Oliver (Tom) and great grandchildren Jack and Lily Jane Oliver all of St. Petersburg, FL and grandson Patrick Rogers of Baltimore, MD. In addition to her parents and husband, she was preceded in death by a daughter, Jane Susan Rogers Miser; a son, Ned Anthony Rogers; a daughter-in-law Helen Rogers; three brothers, Howard Hubbard, Fred Hubbard, Aubrey Hubbard; and three sisters, Rebecca Dillard, Sterling Burton and Anne Wooldridge. She was a member of Central Christian Church in Lexington, NY and Quaker Presbyterian of Lynchburg. A funeral service will be conducted at 2:00 p.m., Saturday, April 27, 2019 at Finch and Finch Chapel, Altavista by the Rev. Latta Terry with interment to follow in Green Hill Cemetery. The family will receive friends one hour prior to the service, beginning at 1:00 p.m., at Finch and Finch Funeral and Cremation Service. The family suggests that those wishing to make memorials consider Disabled American Veterans, PO Box 14301, Cincinnati, OH 45250-0301 or St. Jude's Children's Research Hospital, 501 St. Jude Pl., Memphis, TN 38105-9956 .

The family of Peggy Lee Hubbard Rogers created this Life Tributes page to make it easy to share your memories.

Send flowers to the Rogers family.