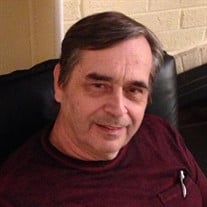 Philip Alfred Toren, 73, of 545 Serenity Lane, Gladys went to be the Lord Friday, December 11, 2020 at Centra Lynchburg General Hospital. He was the husband of Terry Bruffey Toren for 48 years. He was born December 10, 1947 in Chicago, IL, a son of the late Harold J. Toren and Marian Rinaldo Toren. He was a member of Corner Stone Presbyterian Church in Palm Beach Gardens, FL and has been attending New Beginnings Baptist Church in Altavista, VA, since moving to the area in 2016. Philip was considered by his friends and family to be quite a "Renaissance Man". He was a talented musician, aircraft technician, mechanic, astronomer, Bible scholar, ballroom dancer, Army Veteran, competitive weight lifter, Harley Davidson rider, and world traveler; but most importantly, he was a Soldier of Jesus Christ, a spiritual warrior who gently led and nurtured his wife and children in the things of God, by his example and by teaching them His Word. In addition to his wife, he is survived by one son, Ronald Toren of Knoxville, TN; three daughters, Helen Barrett of West Palm Beach, FL, Dr. Virginia Curran and her husband, Joseph, of Australia, and Rebekah Ornstein and her husband, Jason, of Gladys; one brother, Ken Toren and his wife, Carol of Crown Point, IN; two sisters, Sandra Whiting and her husband, Tom, of Newberry, MI and Patricia Zimny and her husband, Dave, of Knoxville, TN; seven grandchildren, Victoria Toren, Kevin Barrett, Austin Barrett, Zachary Curran and James Curran, Daylan Ornstein and Sierra Ornstein; his mother-in-law, Eleanor Bruffey of Clifton Forge; and a number of nieces and nephews. He was preceded in death by one brother, Ronald Grant Toren. A funeral service will be conducted at 2:00 p.m., Monday, December 14, 2020 at New Beginnings Baptist Church, Altavista, by the Rev. Bobby Brumfield. Interment will take place later this week at Virginia Veterans Cemetery in Amelia. The family suggests that those wishing to make memorials consider New Beginnings Baptist Church, 1874 Lynch Mill Road, Altavista, VA 24517. Finch and Finch Funeral and Cremation Service, Altavista, is in charge of arrangements.

Philip Alfred Toren, 73, of 545 Serenity Lane, Gladys went to be the Lord Friday, December 11, 2020 at Centra Lynchburg General Hospital. He was the husband of Terry Bruffey Toren for 48 years. He was born December 10, 1947 in Chicago, IL,... View Obituary & Service Information

The family of Philip Alfred Toren created this Life Tributes page to make it easy to share your memories.

Send flowers to the Toren family.