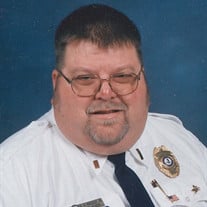 Randolph Arlington Maddox, Jr., 63, of Evington died August 19, 2021 at Gretna Health and Rehab. He was the husband of Catherine Owens Maddox for twenty years. He was born November 16, 1957 in Lynchburg, a son of Ruby Joyce Deaton Maddox and the late Randolph Arlington Maddox, Sr. He was a member of Timberlake Christian Church, a retired employee of twenty-seven years from the Lynchburg City School System, and a U.S. Navy veteran. Randy was also a member at the Lynchburg South Moose #1727, Lynchburg South Moose Legion, and the Campbell County Rescue Squad for forty-five years. He was a past member of Brookville-Timberlake, Lyn-Dan Heights, and Evington Volunteer Fire Departments. In addition to his wife and mother, he is survived by a daughter, Krista Talley Maddox of Evington; three brothers, Randell "Dale" Maddox and his wife, Lynn of Lynchburg, R. Alan Maddox and his wife, Crystal of Evington and R. Alfred Maddox and his wife, Kay of Evington; a sister, Annette M. Dalton and her husband, Keith of Lynchburg; three grandchildren, Luxy Nicole Andrews, Brycen James Madden and Liam Alister Wooldridge; mother-in-law, Nancy H. Owens; sister-in-law, Shelia Bane and her husband, James, who was like a brother to Randy; brother-in-law, Ken Owens and his wife, Vicky; and a number of nieces and nephews. In addition to his father, he was preceded in death by his father-in-law, Robert E. Owens. A funeral service will be conducted at 2:00 p.m., Monday, August 23, 2021 at Finch and Finch Chapel, Altavista with interment to follow in Altavista Memorial Park with military honors by American Legion Altavista Memorial Post 36 and Gretna Post 232. Randy's family invites all attendees to dress casually, as he would have wanted. The family will receive friends from 7:00 until 8:30 p.m., Sunday at Finch and Finch Funeral and Cremation Service, Altavista and other times at the home of Catherine, 6012 Dearborn Road, Evington and the home of his mother, Joyce Maddox, 297 Wyatt Circle, Evington. The family would like to thank all the family, friends, staff, nurses, CNA's, Doctor's at both Gretna Health and Rehab and Centra Hospice for their care and support. The family suggests that those wishing to make memorials consider The American Cancer Society, 2050 Langhorne Rd., Ste. 201, Lynchburg, VA 24501, the Virginia Wounded Warriors Program, 900 East Main Street, 6th Floor-West Wing, Richmond, VA 23219 or the Campbell County Rescue Squad, P.O. Box 4123, Lynchburg, VA 24501.

Randolph Arlington Maddox, Jr., 63, of Evington died August 19, 2021 at Gretna Health and Rehab. He was the husband of Catherine Owens Maddox for twenty years. He was born November 16, 1957 in Lynchburg, a son of Ruby Joyce Deaton Maddox... View Obituary & Service Information

The family of Randolph Arlington Maddox, Jr. created this Life Tributes page to make it easy to share your memories.

Send flowers to the Maddox family.