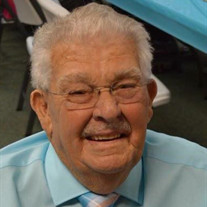 Reaves Aldridge "Pee Wee" Dowdy, Jr., 92, of 1098 Jasper Wood Road, Hurt passed away Tuesday, September 12, 2018 at his residence. He was the beloved husband of Hazel "Shorty" Bailess Dowdy for 44 years. He was born June 26, 1926 in Campbell County, a son of the late Reaves A. Dowdy, Sr. and Minnie Farmer Dowdy. During World War II Pee Wee became a Sea Bee (Nickname for C.B. or Construction Battalion) in the United States Navy and at the tender age of 18 he took part in the military operations at Iwo Jima in the Pacific, then the occupation of Japan after the war. Pee Wee returned home and eventually became a lead lineman at VEPCO and then a supervisor at Richardson-Wayland Electrical Company. Pee Wee was for many, many decades, a dedicated Christian and member of the Baptist Tabernacle in Altavista, and he was a very funny guy to be around. Pee Wee worked hard all of his life and was a master of many trades: electrical, mechanical, plumbing…you name it. If you ever wanted something repaired and repaired correctly, with a laugh or two thrown in, you called on Pee Wee. In addition to his wife, he is survived by two sons, James Deroy St. John and his wife, Jean of Lynch Station and Frank M. St. John and his wife, Mary of Bedford; three daughters, Saibra Dowdy of Richmond, Denise Lewis and Lisa St. John both of Hurt; one brother, Kenneth Dowdy of Hurt; eleven grandchildren; and eighteen great-grandchildren. He was preceded in death by four brothers, Arnold Dowdy, Jay Dowdy, Bud Dowdy and Will Dowdy; and one grandson, Tyler Bohm. A funeral service will be conducted at 11:00 a.m., Monday, September 17, 2018 at The Baptist Tabernacle by Pastor Jon Ensley and Pastor Matthew Speck with interment to follow in Altavista Memorial Park with military honors by American Legion Altavista Memorial Post 36 and Gretna Post 232. The family will receive friends from 6:00 until 7:30 p.m., Sunday at Finch and Finch Funeral and Cremation Service, Altavista and other times at the residence. The family suggests that those wishing to make memorials consider The American Cancer Society, 2050 Langhorne Rd., Ste. 201, Lynchburg, VA 24501, St. Jude's Children's Research Hospital, 501 St. Jude Place, Memphis, TN 38105-9956 or Shriner's Hospital for Children, 2900 Rocky Point Drive, Tampa, FL 33607.

The family of Reaves Aldridge "Pee Wee" Dowdy, Jr. created this Life Tributes page to make it easy to share your memories.

Send flowers to the Dowdy family.