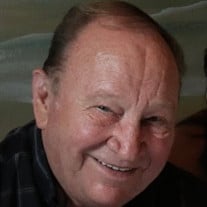 Robert "Bobby/Bob" Daniel Stanga, Jr., 80, of Penhook, VA passed away Tuesday, May 18, 2021 at his home. Bob was born January 26, 1941 in Independence, LA, son of the late Robert Daniel Stanga, Sr. and Jeannette Brunner Stanga. He grew up in Ponchatoula, Louisiana. In the sixth grade at St. Joseph Catholic School, he met the love of his life, Phyllis McIntyre Stanga, his wife of 55 years. They both graduated from Ponchatoula High School in 1959. After high school, Bob enlisted in the U.S. Navy and began a 20-year career as a Naval Aviator, ultimately achieving the rank of Lieutenant Commander. While enlisted, Bob was selected as an officer candidate and became the first of his family to attend college. He graduated from Auburn University earning a Bachelor of Aeronautical Engineering degree and subsequently a Master of Aeronautical Engineering degree from Naval Post Graduate School in Monterey, California. Returning to Louisiana after his retirement from the Navy, Bob started several businesses near Ponchatoula including the Bedico Grocery, a car repair business, taking ownership of Kelly's bar as well as operating a shrimping boat. In 1988, Bob returned to work as an engineer for the Department of Defense until retiring in 2007. Ultimately, he settled at Smith Mountain Lake, Virginia; where as an avid sportsman, he enjoyed fishing, hunting, and farming. Bob has been a highly active member of St. Victoria's Catholic Church in Hurt, Virginia since his retirement. Despite his tremendous accomplishments he was most proud to be the grandfather of eight beautiful grandchildren who call him "Pops." In addition to his wife, he is survived by one son, Jonathan Patrick Stanga (Tara) of Harrogate, UK; two daughters, Cynthia Stanga Thomas (Morgan) of Texarkana, TX, Marisa Stanga Taylor (Jeffrey) of Charlottesville, VA; one brother, Thomas Stanga (Velvet) of Springfield, LA; four sisters, Marion Marcotte (Ronald) of Ponchatoula, LA, Elizabeth Cleaver (John) of Spring, TX, Shelia Stanga of Covington, LA, Shirley Stanga of Ponchatoula, LA; and eight grandchildren, Emily, Chase, Ryan, Jasmine, Sawyer, Sage, Iris, and Rosemary. He was preceded in death by a son, William Scott Stanga; a brother, John Louis Stanga; and a sister Linda Stanga Tamburello. A memorial service will be held at 2:30 p.m., July 17 , 2021 at St. Victoria Catholic Church, Hurt, Virginia. In lieu of flowers, the family wishes memorials be made to St. Victoria Catholic Church, P. O. Box 640, Hurt, VA 24563. Finch and Finch Funeral and Cremation Service, Altavista is in charge of arrangements. Please visit the online tribute at www.finchandfinchfuneralservice.com to share a memory or send a condolence to the family.

The family of Robert Daniel Stanga Jr. created this Life Tributes page to make it easy to share your memories.

Send flowers to the Stanga family.