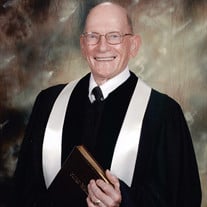 Rev. Samuel Franklin Caldwell, 99, formerly of Rustburg died Wednesday, February 3, 2021 at Autumn Care of Altavista. He was twice married, first to the late Carol Evelyn Tweedy Caldwell and secondly, to the late May Luella Shaffer Mosebrook Caldwell. He was born September 30, 1921 in Campbell County, a son of the late Samuel A. Caldwell and Eunice Franklin Caldwell. He was a member of Bethany United Methodist Church, a retired minister, and a U.S. Army World War II veteran. He is survived by a son, Ray Caldwell, and his wife, Kay of Altavista; a daughter, Dana C. Mosebrook and her husband, Bill of Gladys; a daughter-in-law, Barbara Caldwell of Hurt; seven grandchildren, fifteen great grandchildren, and two great great grandchildren. He was preceded in death by two sons, Robert Caldwell and Barry Caldwell; and one great grandson. A funeral service will be conducted at 2:30 p.m., Sunday, February 7, 2021 at Bethany United Methodist Church by the Rev. Jennifer Moore with interment to follow in the church cemetery with military honors by American Legion Altavista Memorial Post 36 and Gretna Post 232. The family will receive friends one hour prior to the service Sunday at the church. Viewing of Rev. Caldwell will be available 9:00 a.m. until 9:00 p.m., Saturday at Finch and Finch, Inc. Funeral and Cremation Service, Gladys. The family suggests that those wishing to make memorials consider American Legion Altavista Memorial Post 36 and Gretna Post 232, P.O. Box 153, Altavista, VA 24517; Bethany United Methodist Church, 2272 Bethany Rd., Rustburg, VA 24588; or a charity of your choice.

The family of Samuel Franklin Caldwell created this Life Tributes page to make it easy to share your memories.

Send flowers to the Caldwell family.